Breakfast
Plain Swallowtail Yogurt
w/ Honey & Cider Syrup
I woke up with a day full of projects and I started off listing them with a nice bowl of yogurt for company.  Adding a little cider syrup made it anything but ordinary and someday I will market my Maine Apple Pie Yogurt so you can all enjoy it too !  Anyhow after a lil breakfast and some picking up around the studio (the painting studio has kinda been converted into a seed germination station... for the time being) I was off to the Winter Farmers Market... Im counting this as number 8? and there will be  two more to go before the traditional Deering Oaks Market starts on Saturdays beginning in May...  I even saw a couple trucks in Monument Square this Wednesday but I was to busy pedaling to my destination to see what was going on there... Outdoor farmers markets coming soon !
Anyhow here is what I brought home from the market this week... 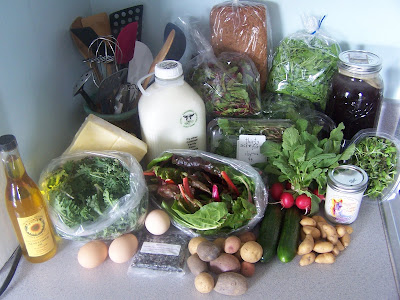 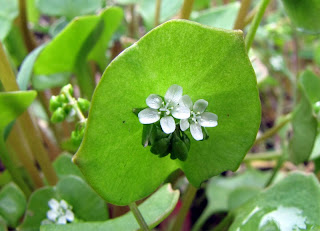 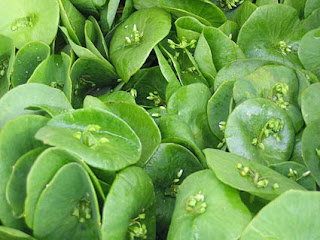 (It was originally eaten by the miners in CA because it was the first green to appear in the spring.  It has a very mild spinach like flavor in the leaf and the stem mimics the texture and flavor of a sunflower sprout.  I have noticed it growing wild on a few west end sidewalks near me... however I try to forage my foods where dogs are less likely to squat... so I have not picked my own yet... maybe this week I will kick around the Eastern trail on my bicycle commute to see if i can score some more !)
Fishbowl Farm
Beet Greens
Watercress
Spinach
Bunch of Radishes
Swallowtail Farm
Jar of Creme Fraiche
2 Loaves Spelt Bread
(apparently my request for it last week did not fall on deaf ears.... this wonderful bread is made by one of the interns at Swallowtail and is made using spelt flour from Webb Farm)
I also grabbed cucumbers from Olivia's Garden, pastured eggs from Buckwheat Blossom, and another 6# jar of Dark Honey that came from a colony of bees located right here in the greater portland area ! Wow them was some heavy bags to trodd back to the West End with !
Now it was time to wake up Cassi and get breakfast rolling...
Lunch
Sunnyside Up Eggs
over Micro Greens & Miners Lettuce (Claytonia)
Side of Assorted Baby Taters & Sauerkraut
Slice of Spelt Bread with Creme Friache 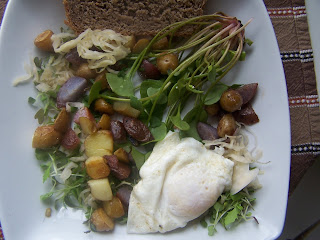 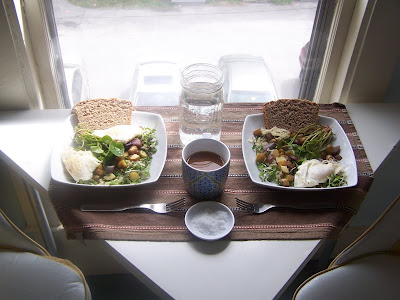 I decided to utilize some of the wonderful greens from Thirty Acres in this breakfast dish... the plate began with a sprinkle of micro greens that had been mixed with some finely sliced sauerkraut and tossed together.  I garnished the side with a bunch of claytonia and placed some baby homefries over the greens.  Topped off with a duck egg for me and a chicken egg for Cassi with some fresh spelt bread on the side...
Spring Breakfast !  So fresh and subtle that I can't wait for tomorrows breakfast...
Dinner
Spicy Carrot & Bean Soup
I have a ton of Maine dried beans... it was a bad season so I over stocked the cabinet due to the fact they would only be available to purchase for about a month before they'd be tagged as OUT OF STOCK till next season... with all these beans and a hefty bag of slightly slimy Nantes and Purple Haze carrots I decided to start a soup early in the morning...
Here's the beginning... 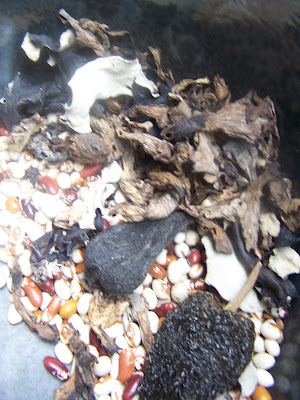 It started with about three cups of beans; jacobs cattle, yellow eye, red kidneys, a couple of crushed and dried ancho peppers, a handful of black trumpet & wood ear mushrooms, some local seaweed and a whole lot of sliced carrots...then lots of simmering... 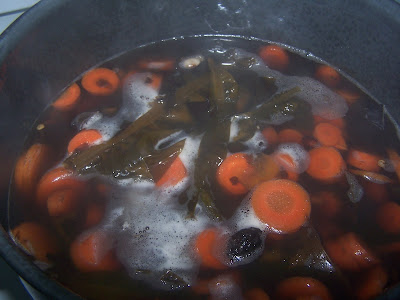 After a few hours of simmering I used my immersion blender and turned it into a thick soupy bowl of spicy carrot bean soup.. more pics when I serve it up again !
Dessert
Cornbread
w/ Whipped Honey