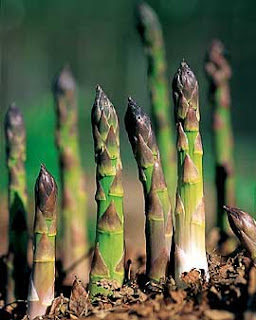 Day eight had the introduction of Maine alcohol, as well as the first asparagus of the season.
The morning started at the usual 5 am hour with Cassi and I both needing a quick start to the day, I opted on using what was left of our spelt bread and whipped together a little French Toast. I had eggs but no milk so I substituted the milk with a bit of yogurt, which thickened it too much so i thinned that concoction with a bit of cider... the end result lathered in maple syrup was just what I needed to get me through the last morning commute of the week. At work later that day, we received a special delivery of asparagus from Moaar Farm in Mt Vernon via the crown of maine co op. That got my mind thinking about a special dinner for the evening with plans to attend Food Inc. @ Space Gallery and then Break Science @ the Asylum, it had to be fast, substantial, and special. A bottle of Bartletts Orchard Apple & Blueberry Wine became an early selection as well as the obvious bunch of asparagus. After the great experience we had with the bay scallops earlier in the week I decided to make a stop on the way home and add those to the menu. As you can see from the final dinner spread I kept it fairly simple but the end result was quite delicious. Following a relaxing meal we were notified that tonights viewing of Food Inc. had been sold out. On hearing that news, we kicked back on the deck and enjoyed the bottle of sweet ruby nectar one glass at a time.

Transportation for the day included my average 28 miles on bicycle and 1 mile of walking.
Posted by Lukaduke at 12:00 AM