Day three was a highly productive painting day which turned meals into straight up left overs leaving as little time away from the brush as possible. The morning started off leisurely with a early morning stroll down to the farmers market with a pocket full of potential. Pick ups this morning were as follows: Bagged herbs; lemon balm, peppermint, cilantro, rosemary. Cheeses; Smiling Hill R&R Cheddar and plain yogurt, Tourmaline Farm goat Mozzarella. Olivia's Garden cucumbers and tomatoes as well as a handful of new herbs for the container garden; lemon verbena, pineapple sage, spearmint, peppermint, tarragon and flat leaf parsley and then some rhubarb, spring dug parsnips and some onions. Leaving with quite a handful we worked up quite an appetite for breakfast and upon arriving home proceeded to cook up a massively tasty breakfast with the inclusion of TEA ! Just a handful of lemon balm leaf chopped up into a steamy french press...a lil honey and presto. There is alot of experimenting to be done with teas.... more updates in the future. After breakfast Cassi and I savoured our last sips of tea on the deck as we transplanted our carefully planned purchases from the market hours before. The day rounded out with soup leftovers and 10+ hours of painting. First Thunderstorm of the year too !

Today's had a magical moment where i was painting purple clouds after the thunderstorm while listening to a Theme Time Radio Hour (Bob Dylan's radio show), episode on "colors". As Dylan described the purple sky after a thunderstorm leading into his next tune... Jimmy Hendrix's Purple Haze. Just then I realize the most beautiful purple skyline out my studio window as I brushed out my lil purple clouds one stroke at a time.....
Project Local Rootz in full effect !
My studio view 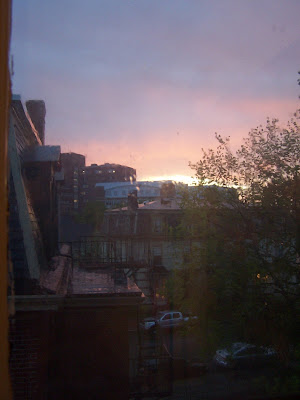 and a little peak of the new work.... 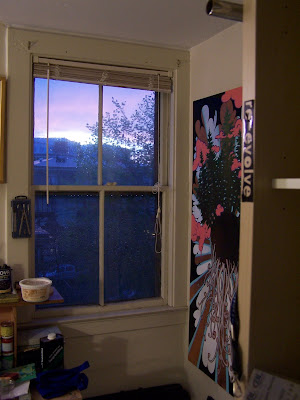