LocalRootz Garden 2021 has been sowed and planted! It has been an interesting year of planning with lots of hard work setting up the new beds and coming up with a plan of action to activate all our new found growing space. It will be a bit of a experiment this year to observe how different plantings react to different zones of the garden. I try to set my expectations low and ride the wave of the season which has already started off with its curveballs. From hungry chipmunks to a 3 day stretch of almost 100 degree weather to finish off planting season, one thing I thoroughly enjoy about gardening is its humbling of the spirit and also its demand that you pay close attention to weather patterns, insect migrations, bird behavior and just the general ecosystem of the homestead. Our Eastern Pheobe is perched out on the garden trellis hunting bugs most of the day and making trips back and fourth to her nest on our security light out back. She has built her nest ontop of that light for the last 5 years. The chipmunk babies are out and about...starting to squabble over territory and raise a ruckus in the beds and also seemingly showing absolutely no fear to us "humans". I am also noticing huge numbers of dragonflies which seem to be even more diverse in species every year along with a slew of hummingbirds and grasshopper nymphs which have been dining on lots of leaves but so far haven't caused too much of a nuisance and I believe a main source of attracting lots of hungry birds to our little canopy opening in a seemingly endless forest environment we are in the middle of. 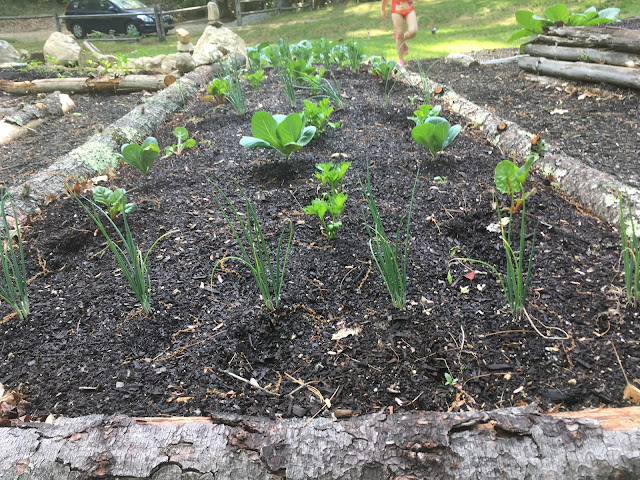 Hazels flower garden is slowly filling in with lots of undersown flowers emerging for the second wave coming in a month or so.... I also planted a few corners of nasturtiums that I will be trellising up a yet to be constructed teepee shape for optimal Hazel enjoyment... when describing it to her she smiled and said a flower camping tent! 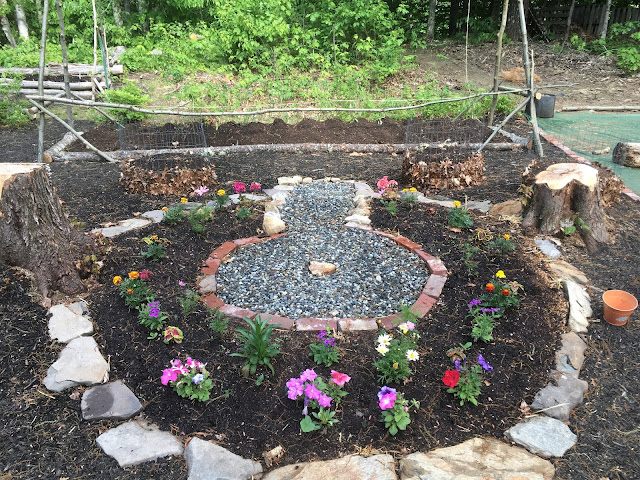 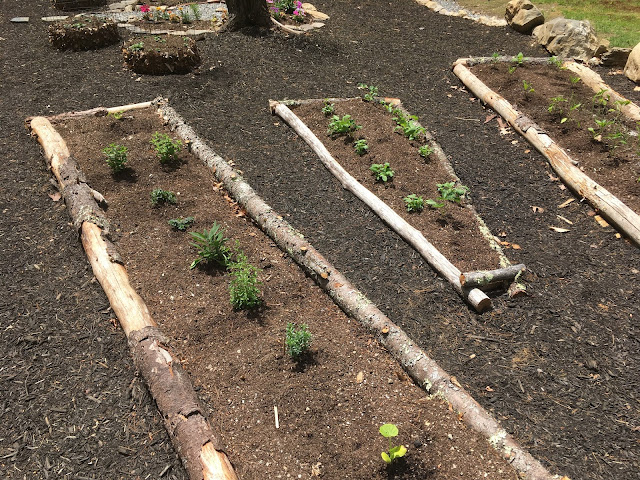 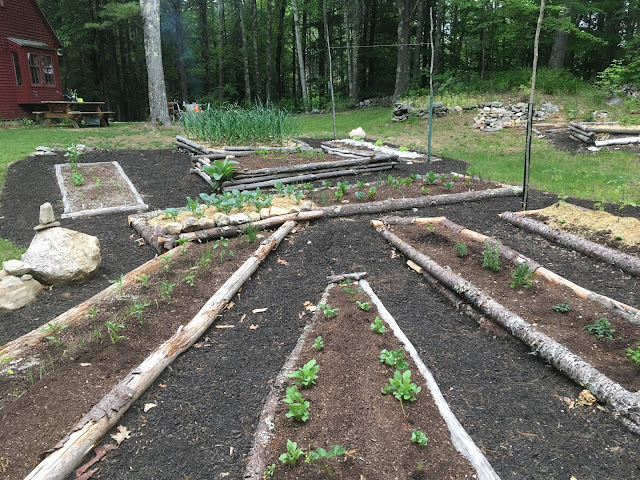 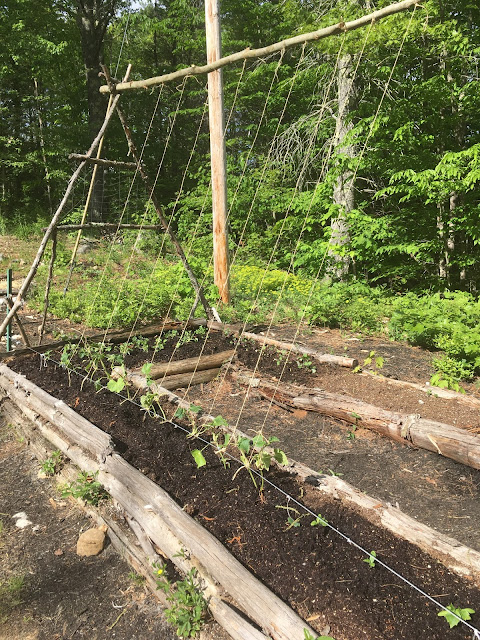 I have started trellising the cucumbers and working on the tomato set up. This year after 4 seasons of tomatoes in the bed above I switched it to cucumbers and will be utilizing two of the new beds for this years tomatoes. 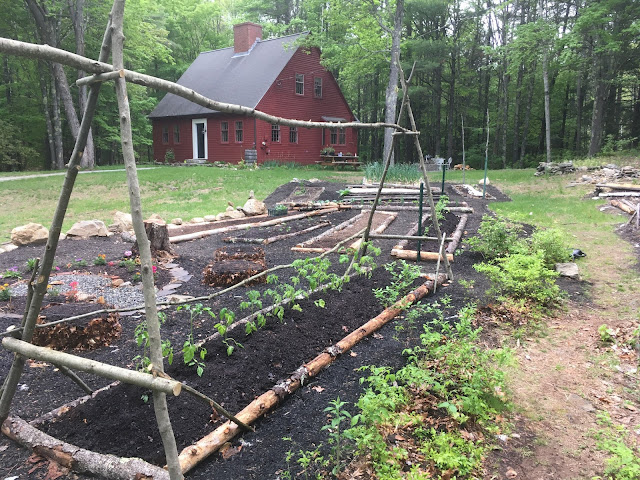 I haven't completed the tomato trellis system yet but have decided to go with the system I have been using for one of the new beds and the second bed with more cherry style tomatoes in it, I am going to give the "florida weave" method a shot just to keep it interesting and see how low tech I can take it. 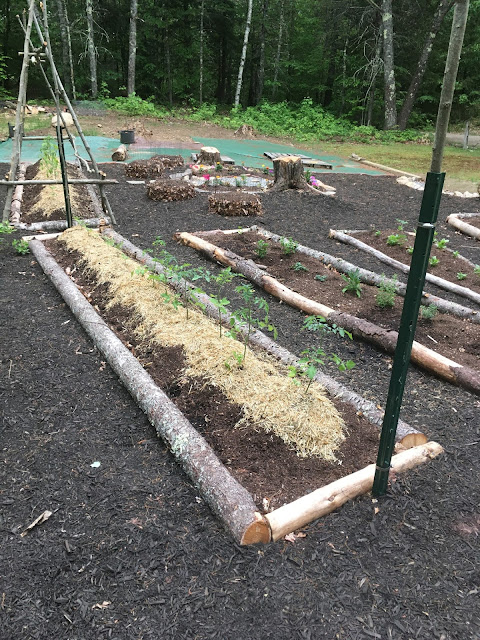 I got a layer of straw mulch down a little earlier than usual, due to a forecast for a cold rainy stretch early in the season. The straw mulch helps the especially disease prone tomato plants from getting soil splashing on the leaves which is a major factor in tomato disease. Its not a fail safe but its a cheap easy preventative method that also helps suppress weeds and helps the soil maintain moisture longer between waterings. 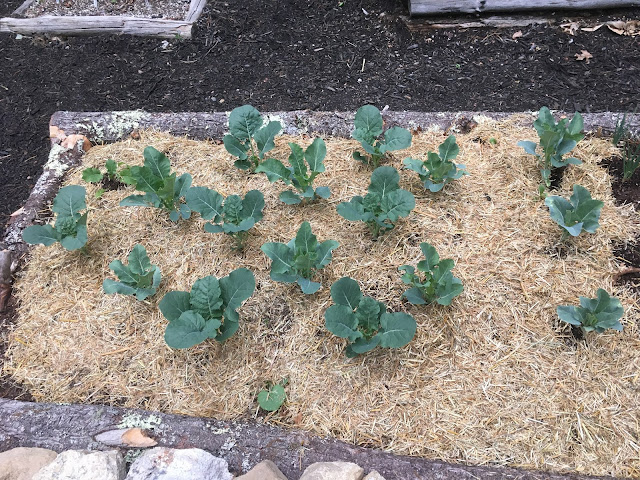 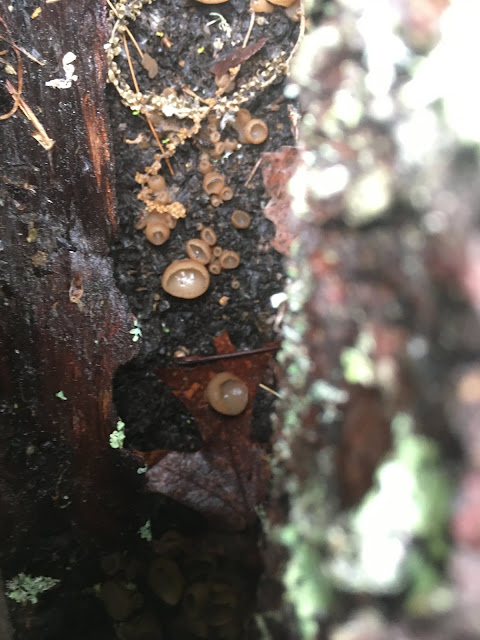 Our friendly fungus and slime mold population is back and migrating about the beds. 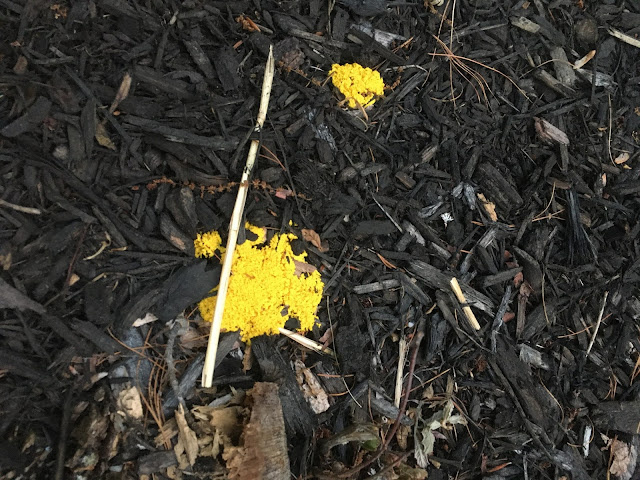 Tokyo Bekka has been a tasty addition to a few spring stir fries and salads. 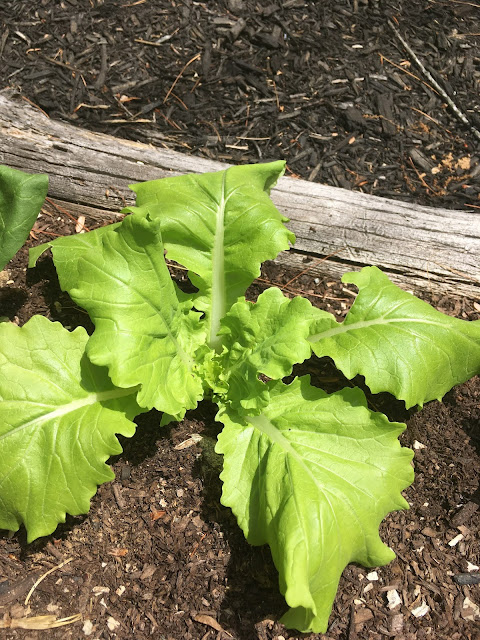 Always nice to see some beneficial ladybugs nestled into the garden ecosystem. 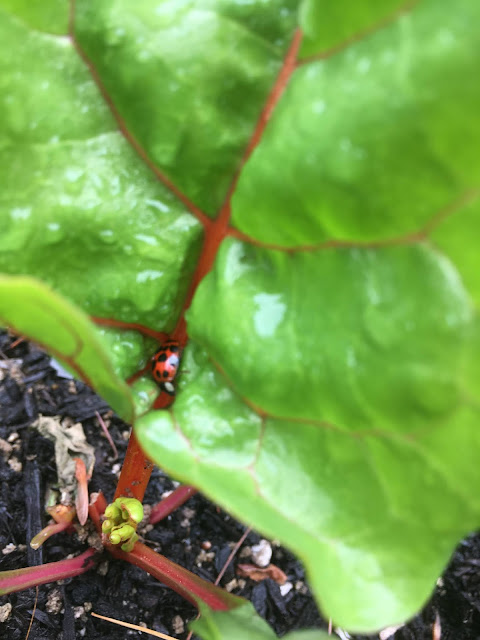 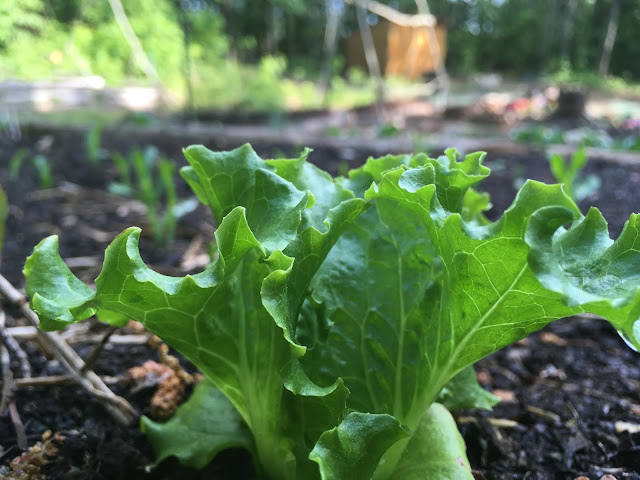 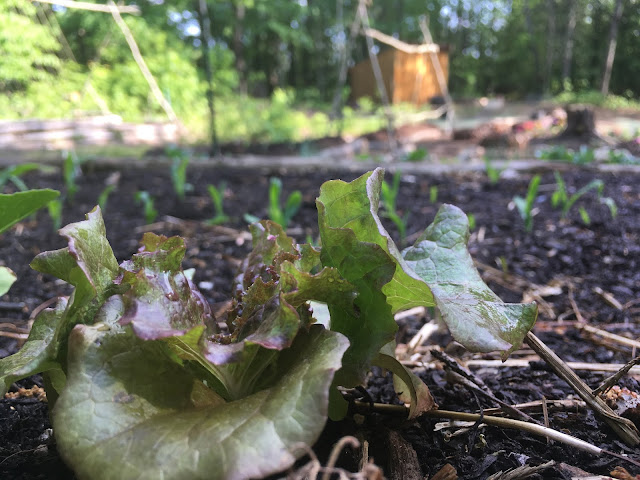 Potatoes are poppin' and its been an interesting observation to watch the growth correlation to the sunlight exposure of each mound. 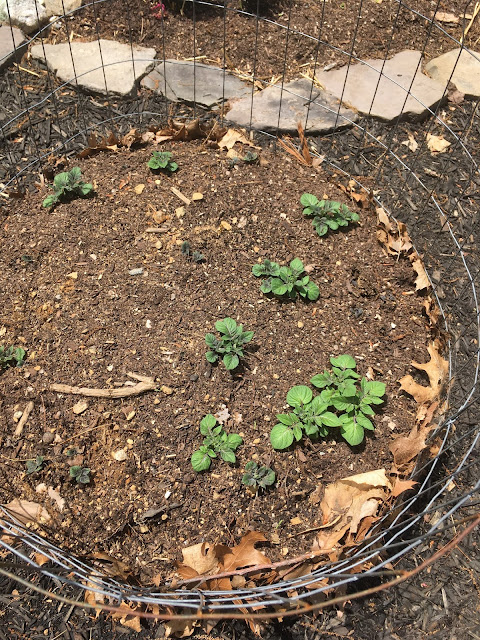 Breakfast Radishes are sizing up for our dinner plates. 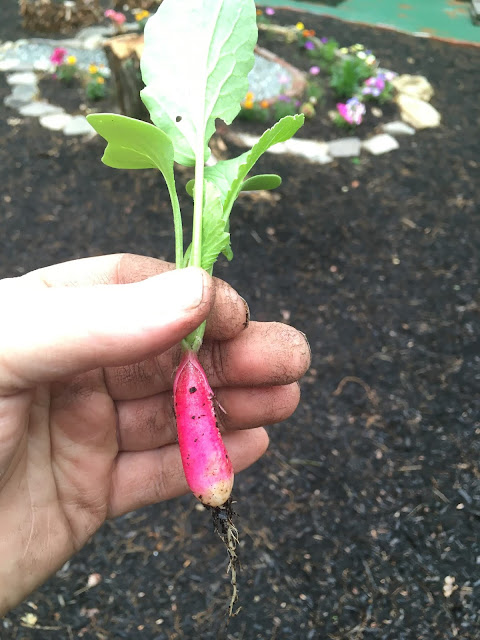 Our Irises have been putting on quite a show for a couple weeks. 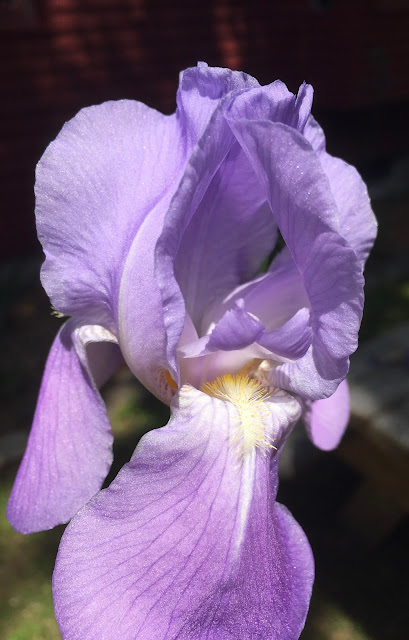 And after a rainy weekend a few weeks back the frogs and salamanders were out scavenging the new moisture rich environment. 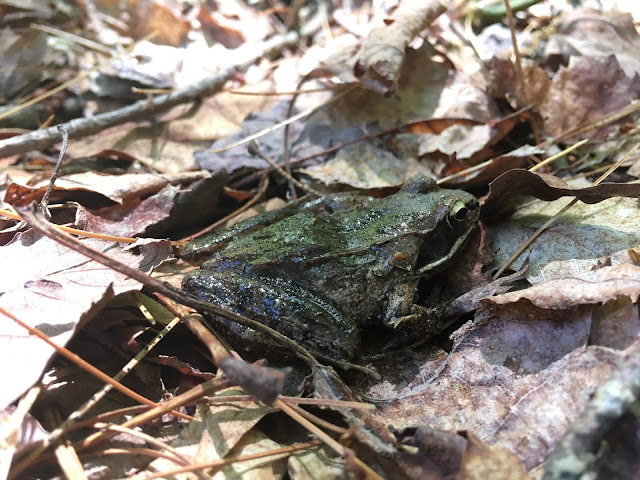 Hazel was surprised by this sweet garden spider who seems to enjoy her flower garden as mush as she does! 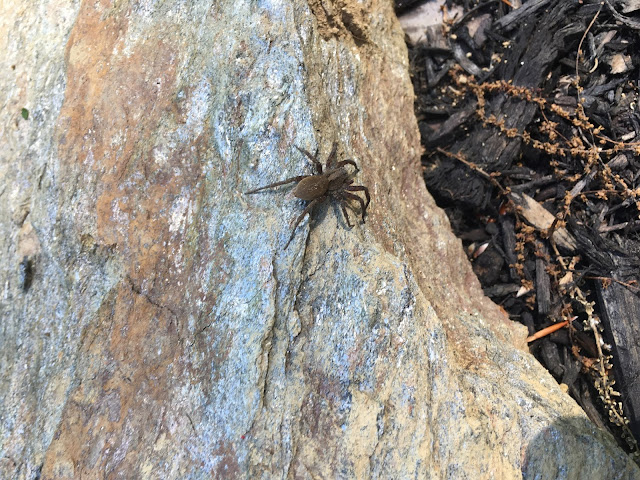 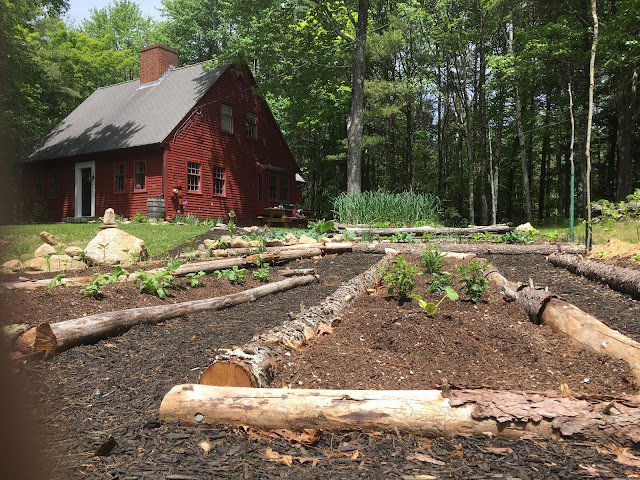 A rare pause in the action as we await more seeds to germinate and the inevitable influx of weeds and invasive sprouts from the newly cleared growing space. After an afternoon reflecting on the success of our garden expansion it was time to open a few homestead ferments and enjoy a little fire to welcome the summer weather. 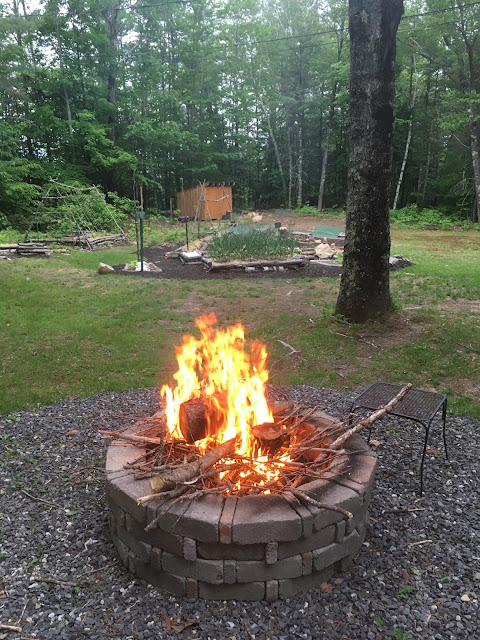 As the temperatures soared into a rare late spring heatwave we took advantage of our local swimming hole and felt the excitement of a summer full of outdoor adventures, local eating and hopefully a little relaxation mixed in for good measure!
Range Pond. 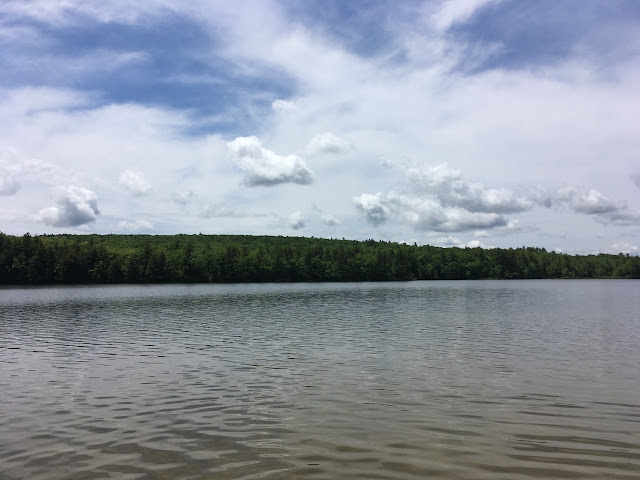 I have found bringing my traveling watercolors to the beach always encourages some downtime creativity while Hazel engulfs herself in the sandcastles and digging projects. 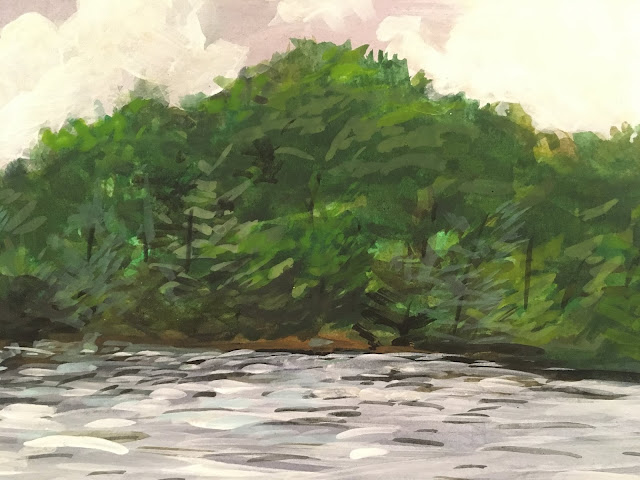 Thanks again for passing through as we keep you up to date on successes and failures in our current homestead projects!
Posted by Lukaduke at 7:17 AM