A quick rundown of how this came together...
Add fresh fettuccine from the fridge to a large pot of boiling water with sea salt
as that boilings to al dente...

grab a skillet and saute butter, fresh crushed garlic & red shallots
adding a small handful of lobster meat as well a a half pound of Maine shrimp

in a separate sauce pan I melted 2 tbsp butter with a half cup of goat cheese and a quarter cup of milk on a very low temperature... giving it a quick whisk.

when the pasta is the perfect consistency strain and toss with cream sauce and sauteed seafood ! 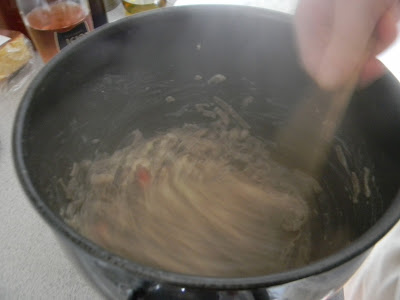 Tossing it all together... 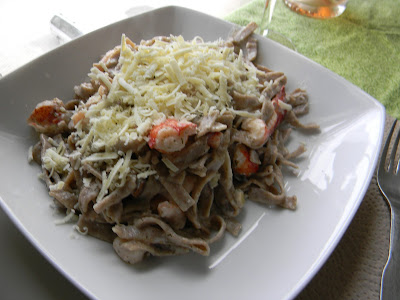 Topped with a heap of Swallowtail Parmesan

(so glad Swallowtail Farm decided to do a Parmesan...this is the first week they have had it...
Keep up the great work guys ! ) 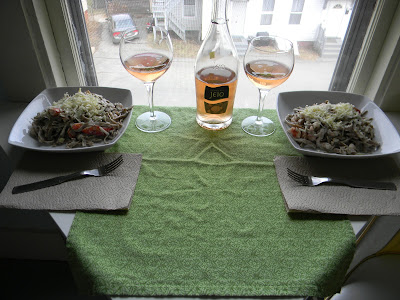 So today's meal was nice and quick seeing that we made extra pasta and I am not gonna lie... its was on my mind all day while I was plugging away at Lois' where I am the produce manager.  Its funny when we decided to dive back into our locavore ways during this 5 week campaign for the Green Wedding Contest, we were so confident that we could do it because we had done it before.  The difference was last March when we were fresh into the LocalrootZ Project we had horded so much food and set up a little more storage food then we had this year.  This year we have been sliding back into our weekly buying habits which sustains our needs from week to week but when the well runs dry... we are left with an empty bucket... for example last year we sauced up a lot of Olivia's Garden tomatoes before they ran dry (we had started the winter off with close to a dozen jars from our own tomatoes but those went really fast this winter, we also had over 50# of hearty winter squash stored in our back hallway last year... this year my bikes took over that storage space and we are left with hoping one of the farms will show up to the winter farmers market with some storage squash ! March is the gray month in between the winter crop and the fresh spring shots that are so close you can almost hear them cracking the soil reaching for the suns warmth that has seemed to escape the ground for the last 4 months !  My point is March and much of April are the hardest months for a locavore in Maine but as you can see it can be done... and it becomes especially easier when you broaden your diet to allow some sort of local protein. Cassi & I were both long term vegetarians when we met and I slowly worked small amounts of the coastal bounties onto our plate...

We feel confident about our choices pertaining to eating seafood after researching the right species and fishing methods from our local fishmongers as well as using some great online resources such as Fishwatch ! Another great reason to support your local fishing industry is to preserve the working waterfront of this great state.  Year after year you see news reports about the local fishing industry struggling to stay afloat as the city of Portland tries to figure out what to do with the numerous vacant buildings along Portland's waterfront.  These vacant lots are constantly being perused by condo developers who are urging the city to lax its restrictions on what can be located along the salty Casco Bay.   I myself think the "working" waterfront is the heart Portland and urge people who agree to stop by one of the great fish markets located along the wharf and serve up some seafood to your friends and family next time your not sure what to make for dinner.... if you really are curious about the most sustainable protein from the ocean I would urge you to consume oysters ! Oysters are an amazing food that a lot of people are scared of... we were at first and now we consume them pretty regularly... in fact we are  gonna get some this weekend and do a special post about the wonders of oysters !
Stay Tuned...


Ok sorry I digressed a bit.. where was I ? Right I was talking about how we were a little less prepared for the local eating challenge this March as we were last year... rather than get to wordy and to avoid any more passionate ramblings about food, lets take a quick glimpse at our food stock at the start of March ! 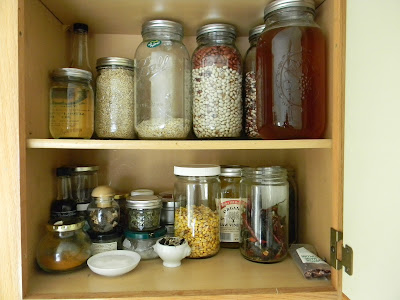 in the cupboards we have lots of local goodies... whole corn, beans, seaweed, various locally foraged mushrooms, various types of hot peppers from our garden, cider vinegar, sea salt, oats, wheat berries, sunflower oil, canola oil, dried herbs, honey, popcorn and a curry blend that isn't 100% local but we got it from a pleasant woman from India who had a booth at last years Commonground Fair, she grew some of the spices in the curry on her farm but certain ingredients in the mix just cant be produced in Maine, however she grinds it all herself so we allow it... I mean in reality we will use foreign flavoring occasionally... ever heard of the spice trade.. its been going on for a longtime ! 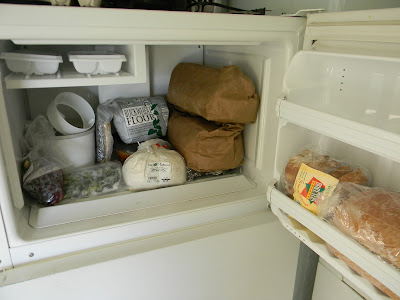 then there is the freezer.. some frozen broccoli from last falls harvest as well a some frozen blueberries and Lalibela tempeh backstock, along with those you'll see various ends of bread that we will use for breadcrumbs, stuffing or croutons.  We also store a lot of our flours in the freezer... 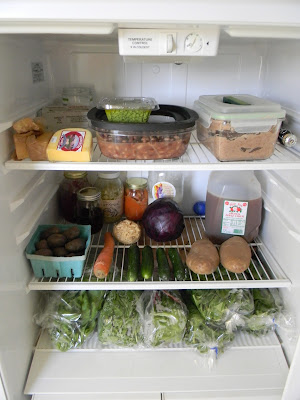 and then we have the fridge... lots of root veggies potatoes, beets, carrots, celeriac root, all of our krauts and kimchis, yogurt, cheeses, beans, spinach, arugula, baby chard and this weeks newest addition cucumbers from Olivia's Garden... still waiting on their cherry tomatoes to ripen up in the greenhouse but the cukes should hold us over... Thanks Guys !


Alright there is a little update about our food stock as well as some interesting tidbits about our trials and tribulations about finding local foods and why we do it...