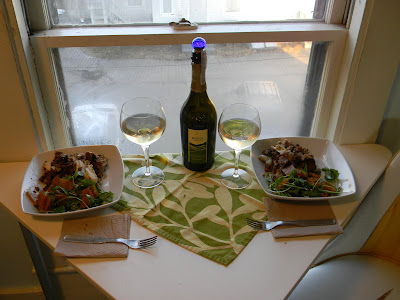 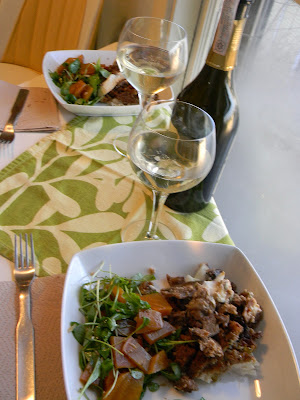 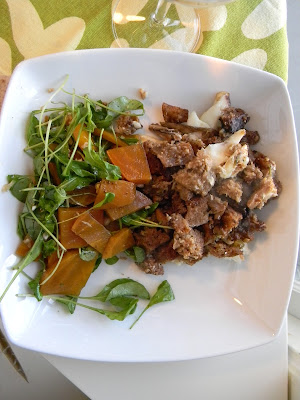 A wonderfully local dinner that was fairly easy on the pocket.  the Beets are from the day before so that was as easy as slicing them up, tossing with cider vinegar from Ricker Hill Orchards, a spoon of honey and a couple handfuls of Olivia's Garden Arugula that cuts into the sweet with a nice spicy pepper and crisp crunch.
As for the fish, I purchased it today on my bicycle commute home.  It has been really nice being back on my summer bike... mostly because of the two inch nobby tires with carbide studs that are on my winter bike. They are great when I'm in the midst of a blizzard, but not so great when the roads are clear... and now with most of it melting away from my route Im back on my Surly LongHaul trucker !
If your interested you can check out my bicycles here !

Ok I digress, so where was I, Ok, I stopped in at Free Range Fish and went with a pound of the cheapest haddock at 5.99/#... from there it was home to a smiling Cassi who was ready for a relaxing night with the kitties and some warm food.  After the cupboard inspection, we found that we had a jar of dried wild foraged mushrooms (lobster, woodear, chanterelle, morel, & maitake mushrooms), and in the fridge were some Damriscotta oysters from the weekend that we never cracked open as well as some odd and ends of our favorite local breads stashed away in the freezer.  We got to work with me chopping and Cassi peeling...a stuffing stock was made with shallots, garlic, leeks, re hydrated mushrooms, white wine, and raw oysters.  From there we chopped the bread in tiny cubes, tossed in local sunflower oil and baked till crisp.  Seafood Stuffing over haddock is a favorite of ours and once the weather warms up we don't make it often so we decided to celebrate the flavors of late winter and accompany it with a non-local beverage.  A little Italian bubbly courtesy of Bisol Jeio Crede.
A wonderful Prosseco that Cassi and I had the pleasure of learning more about from Mateo Bisol himself.  He is the grandson of Jeio, his family grows their grapes on is the prestigious Cartizze hill, where his families roots can be traced back to the 16th century.

After a wonderful dinner we decided the only better way to finish off this night was with dessert.  Luckily Cassi had hunted down some Ricker Hill Macintosh apples at the market early that morning so it was an easy decision to make our old stand by...
Dessert
Apple Crisp
w/ Maple Ice Cream 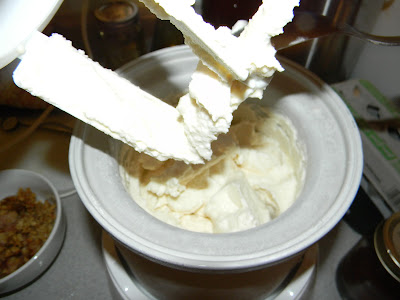 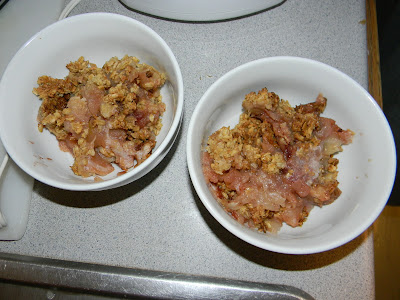 the apple crisp is simply sliced maine apples topped with a
crisp that is Maine Butter, Maine Grown Oats, and honey 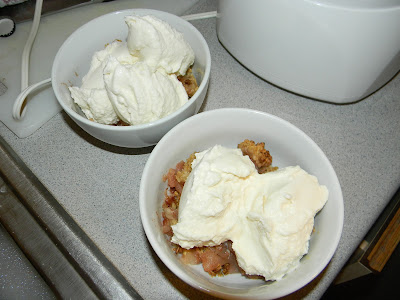