Today being Memorial Day, was a holiday from work. It started as all non-work days start with a special breakfast geared towards a Mexican flair...at least as Mexican as Maine ingredients in May will allow. The extra bean dip I had made from the prior evening created a good base to build an omelet around as well as some fresh tomatoes and loads of cilantro. After breakfast Cassi had to work so I took advantage of the good weather and got on my bike. My partner in crime for todays ride was Andrew Land. We tend to push each other to the limits and today was no different. We spent a couple hours tacking up about 30+ miles around scarborough, cape elizabeth and a bit of so portland. It was a beautiful day for riding but the headwinds put us back on my rooftop deck, feet in the air enjoying some alcoholic beverages in no time. After some relaxing, Cassi arrived home from work and dinner was on... simple yet filling...we went back to the New England Fish Tacos because we had both enjoyed them so much the week prior. The day ended with a bit more fussing of the new painting series and a viewing of the movie
... the 11th Hour, and enviormental awakening which I highly recommend !

Lots and lots of cilantro was consumed today soooo... 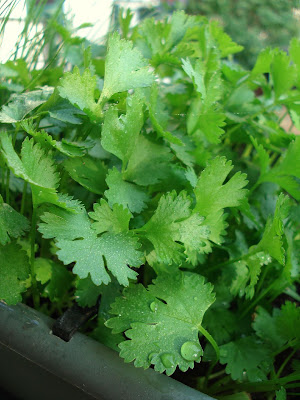 Transportation included 33 miles via bicycle as well as 2 mile stroll around town.