Today had a better than average breakfast due to both Cassi and I needing to leave for work for five forty-five. Seeing that we were both up, I decided to throw together an omelet with the left over arugula and decided it never hurts to add more asparagus in the mix... After eating we went off to our daily grinds, and being Monday (bread delivery day) I was planning on bring some more mother oven bread home for dinner. I had already started thinking about how good the tomato basil sandwich was on our first night into the project, and decided that would be dinner tonight. Especially since we still had the Goat Mozzarella that was purchased from Tourmaline Farm at the market on Saturday...unfortunately those dinner plans had to be aborted. Why ?... because there was a sickness at the Mother Oven bakery... rats, this caused me to be a little stumped as to what to do now.
As I quickly pedalled my way home from work...I zipped along the greenbelt and across the bridge as I was admiring the beauty of the bay below, it called to me "scallops". Quickly my bicycle swept down park ave... down to commercial and straight into "Free Range Fish & Lobster". I walked straight to the case and perked up when I noticed Mahi Mahi for only $6.99/lb. I inquired and found out it had been caught in the southern Atlantic off the Florida coast...damn I figured as much but it never hurts to ask...anyway, bay scallops were the real reason I was here and they were in abundance. I decided 1/2 lb wcover it, we had some Maine shrimp meat already at the house as well as a handful of asparagus left over from the farmers market. It all came together with the addition of some beautiful cherry tomatoes which I seared with shallots and butter on our new cast iron skillet...excellent. Mother Oven bread will come again Friday...Ill keep my fingers crossed this time and in the meantime am looking into baking bread using sourdough starters. Stay tuned for more bread updates as this happens. 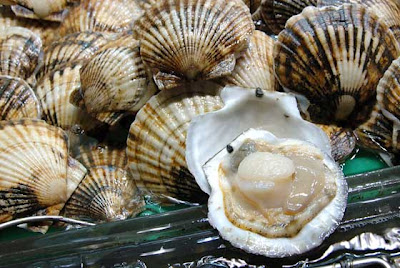 Transportation today included 22 miles of biking as well as a 2 mile after dinner stroll with Cassi.