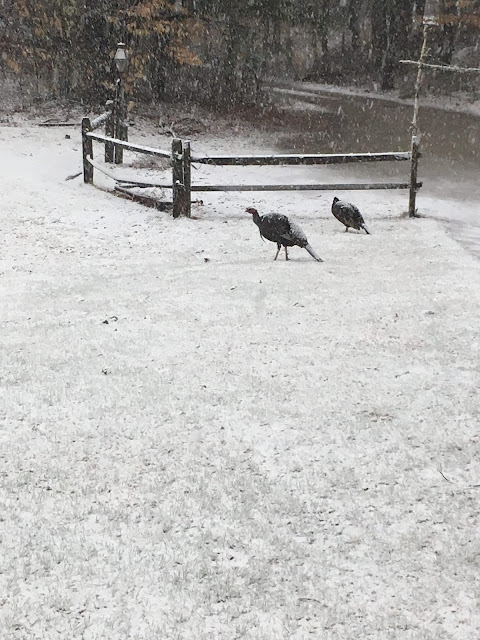 So Spring did what spring tends to do here in Maine by ebbing and flowing from 30 degree mornings to 70 degree afternoons, followed by blankets of wet snow and stretches of rainy muddy days. Eventually the colder mornings slowly subsided and the the ochres and grey tones started popping up with hints of greens and yellows. This year with our little Hazel getting older we found a little more time to get the garden back in order and to start a broader plan for organizing our current usable growing space. 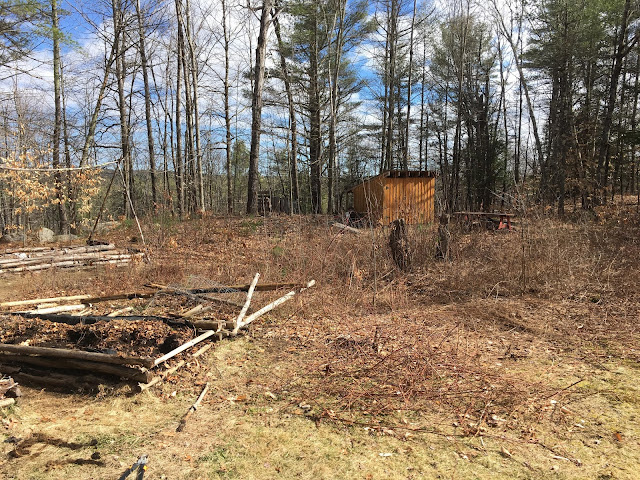 At the end of last season I pulled up the quick fence I had surrounded the raised beds with 4 years ago as it always made raking and mowing a real chore and the look of it never aesthetically pleased me all that much. One major issue I've been dealing with after cutting down those two maples (see stumps  in brush pictured above) was that in achieving my objective of letting in more sunlight to the A-frame style bed that I use for tomatoes (top left of picture)... its also opened the door for the few wild blackberry bushes in the brush to explode! 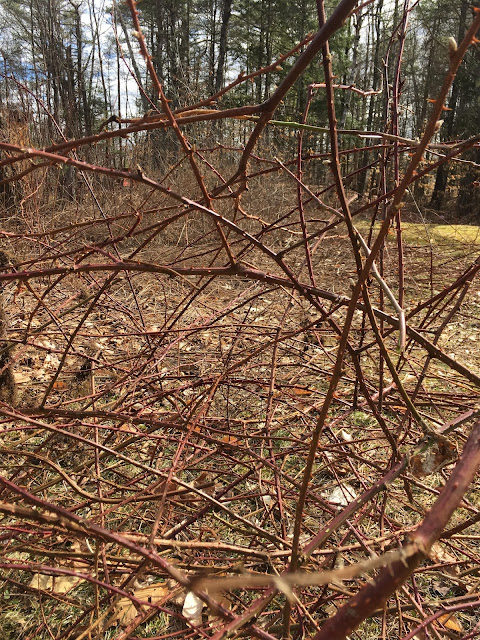 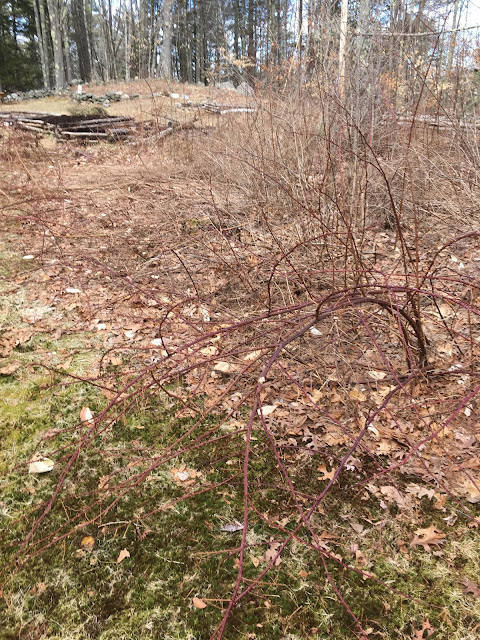 At first I was excited to have an abundance of blackberries and I just trimmed a few canes here and there and utilized the fruit in some ciders and wines that I made, but then they started finding the rich compost in my raised beds and spread like wildfire throughout the growing space overtaking way more than I expected. Some of these canes are over an inch wide with spikes that ravage anything that comes close to it 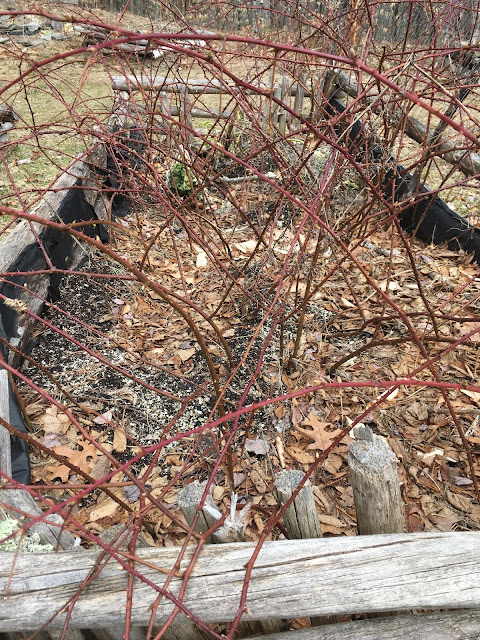 Needless to say I was feeling pretty hopeless and defeated leading into this growing season. I even started researching renting a bobcat to help dig up the mess but even then I knew the rootballs and runners would be impossible to get all of and I would be back in the same spot in another year or two. My only solution was to get angry and grab a shovel, but first I needed to trim these canes back as they were carving up my arms and legs and ripping through my clothing whenever I got after them! 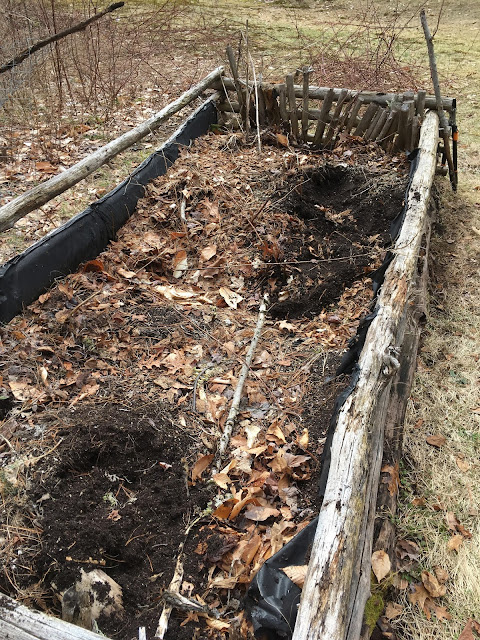 I made some head way digging and pulling them from my largest bed but I knew that simply spreading more compost on top and planting veggies would result in a similar mess next year and the canes would surely effect the growth of my veggies by disturbing the roots... so the decision was made to draw a line in the soil with a shovel,  a moat if you will and deconstruct the bed and get at the root of the situation! 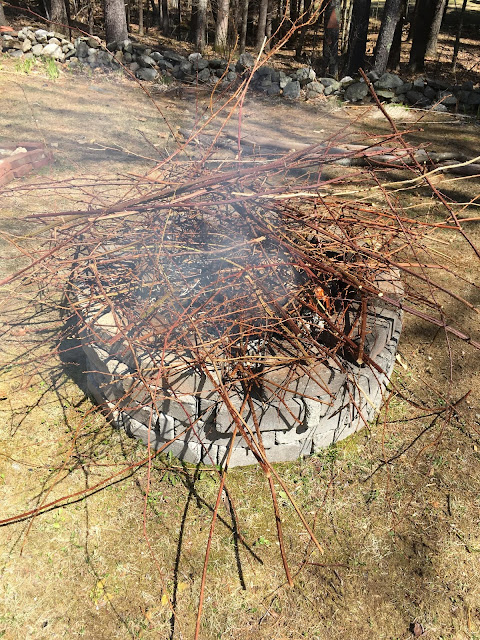 I spent a couple days just trimming canes and burning them, which gave me some satisfaction but they had the last laugh as my hands, arms and legs looked like I was thrown in a room with 50 rabid cats and it didn't help that this was also the start of the pandemic so everytime I sanitized my hands the sting would make me cringe a little bit, ok ok enough complaining! Back to digging... 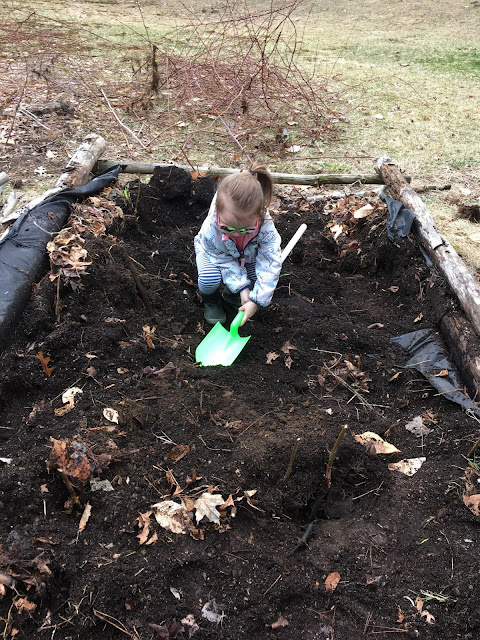 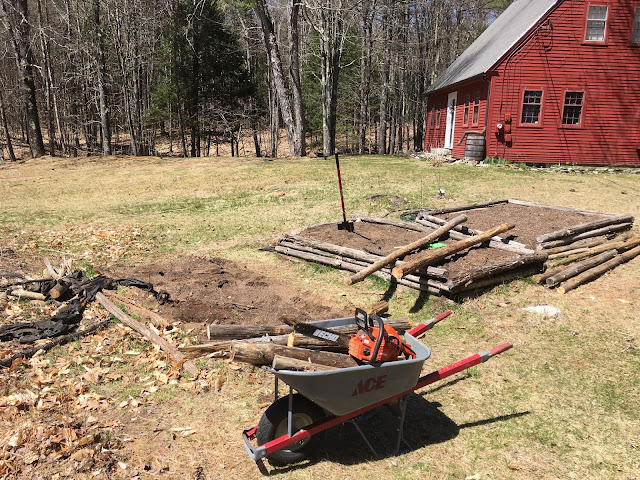 The other lesson I learned was NEVER to use landscape fabric as a base to a raised bed ever again. It ripped into a million pieces while I was trying to dig up the bed and turned a big headache into an even bigger one... luckily due to the cost I didn't use it on the other beds but sifting little pieces of landscape fabric out of my compost wasn't the funnest job so be warned! Also it clearly didn't work to keep the blackberries out so basically it was a useless $30 roll of trash. The good news is all the decomposed logs were easily burned and considering they cost me nothing I was happy with the end result of deconstructing the bed. I was able to spread the ample compost from the deconstructed bed into the two remaining beds and also made two new beds that were longer and narrower than the ones I made 5 years ago when we founded the Localrootz Homestead! 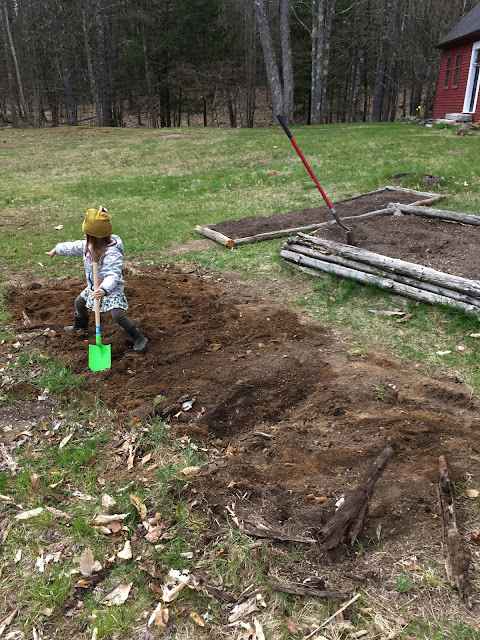 Here is our Hazel getting into the digging, after a couple days we got the majority of blackberry roots out of the soil and decided the best thing to do with this area was to cover it and smother it! 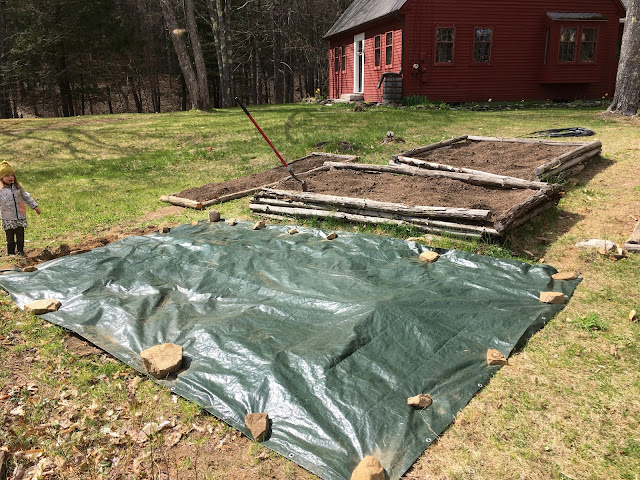 Along with this bed there is a swath of blackberries and other various overgrowth creeping into the open space all along the perimeter of the growing space so I continued the trench to make a moat between the overgrowth that I will continue to battle through the summer and beyond and the area that I want to get under control right now. 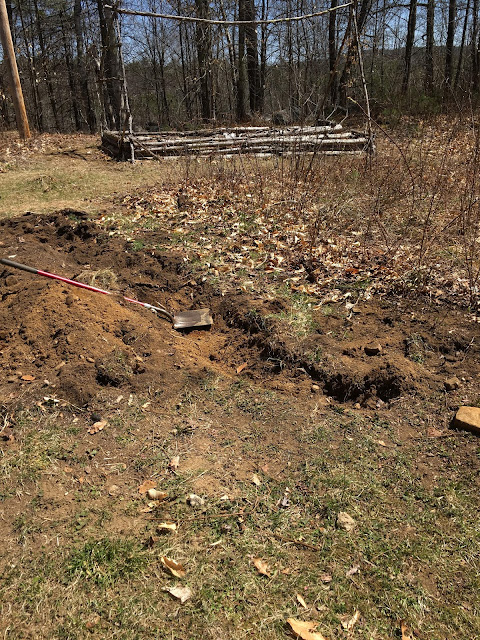 Good exercise is that which ends with positive results and not only did I spend a few days digging trenches but I also uncovered quite a few worthy rocks destined to be wall stones as our soil is littered with lots and lots of rocks being on the top of a large rock ledge! 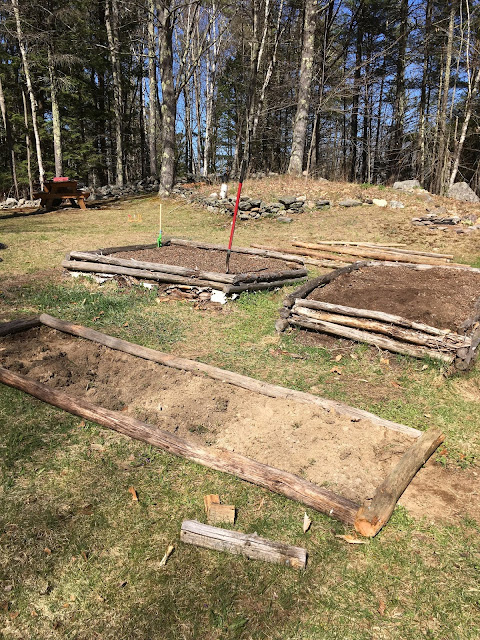 After a couple weeks of deconstruction and destroying things it was nice to start concentrating on building things, growth, and nurturing ! 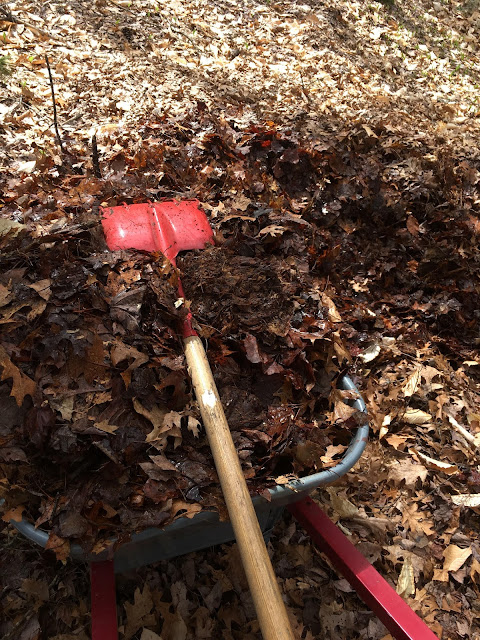 Utilizing piles of composted leaves and rich compost from two years of table scraps and garden waste it was time to start putting a fertile base for this years season! 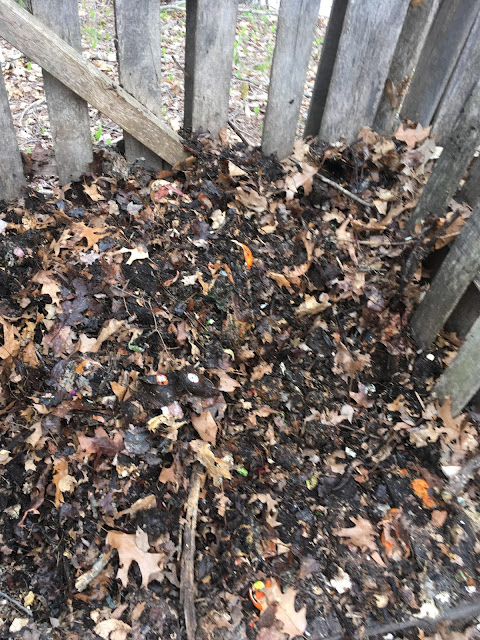 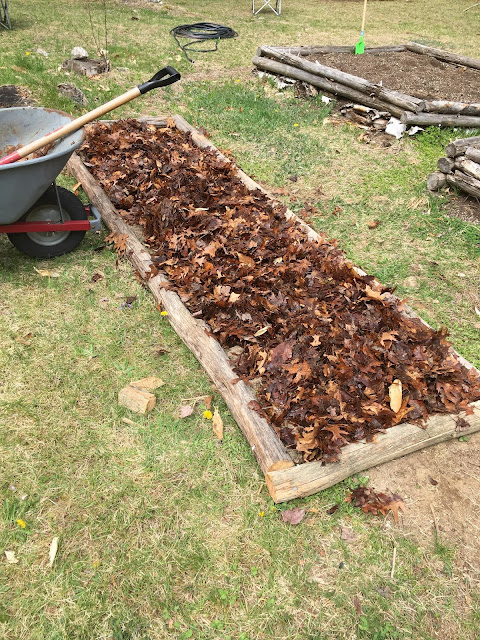 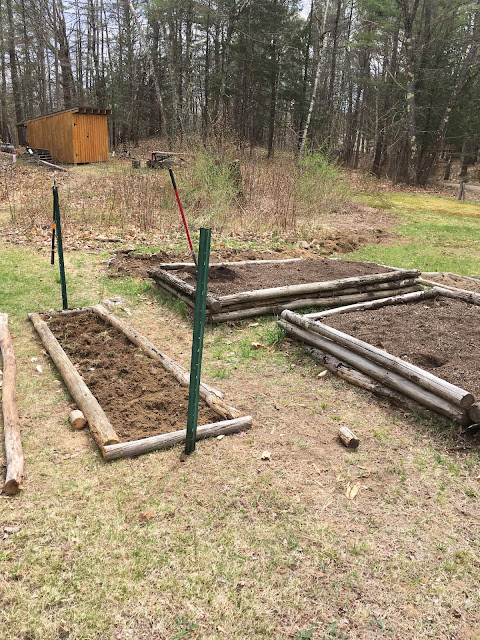 I utilized some of the old t-posts from the torn down fence that will provide good strength for trellising and decided it was a good time to get some seeds started in the basement and plant the first batch of snap peas to get the season underway.... nature agreed and start popping up some deeper shades of green along with a few blossoms! 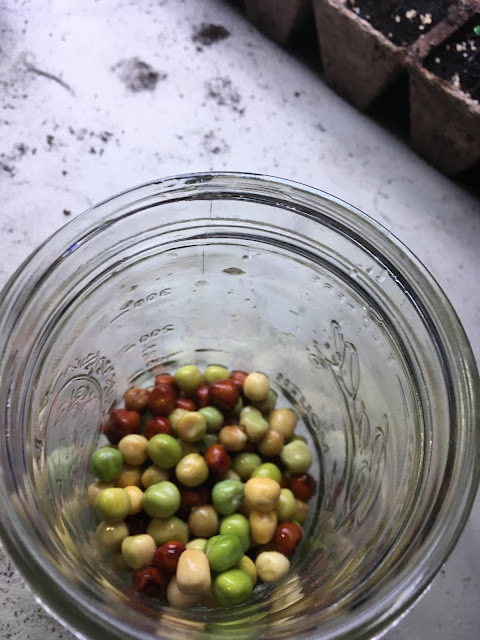 7 Varietals of Peas mostly snap and a couple shelling type and a perfect planting project with a 3yr old! 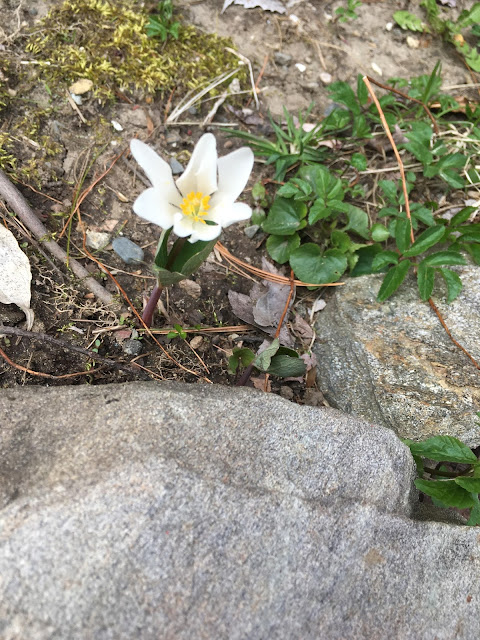 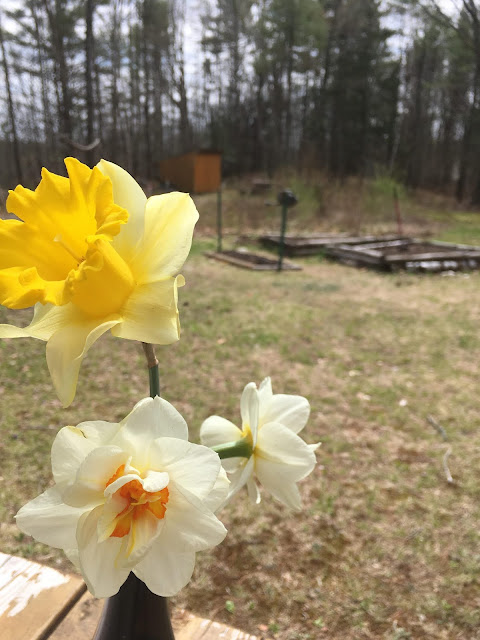 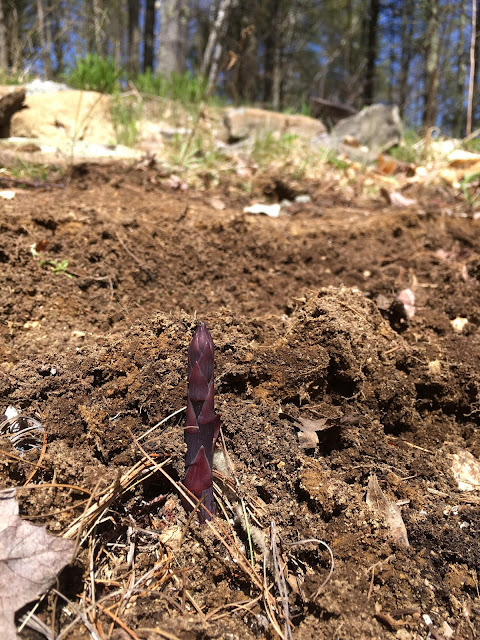 The Purple Passion Asparagus started showing itself as well ! 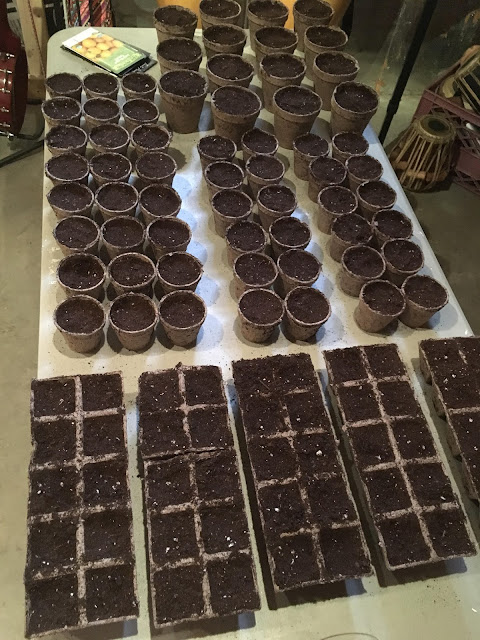 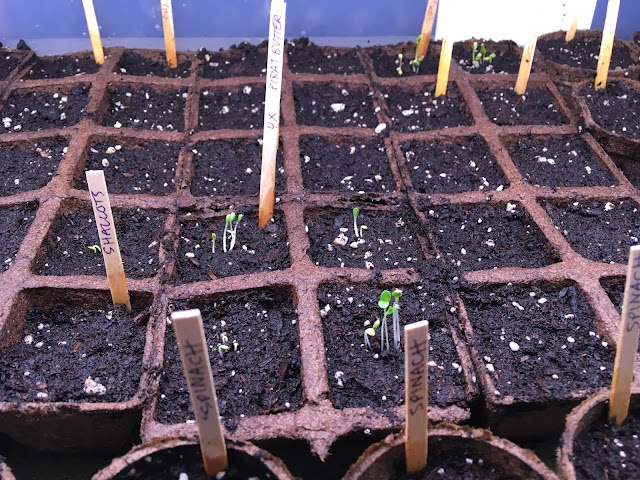 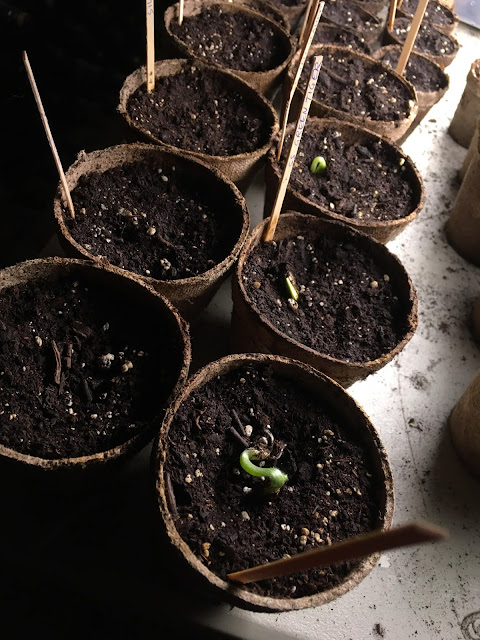 As the seeds germinated it was time for some garden planning for the upcoming growing season!

Thanks again for stopping by!

Another update on its way shortly...