This sweltering summer has resulted in a pretty abundant garden, drought situations, pest issues and lots of lessons on how and why the farmers job can be so difficult and unpredictable. 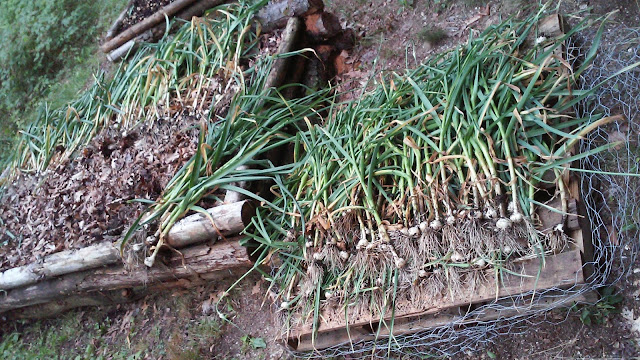 Anyhow, lets start with a success story. Our garlic crop planted last October came up in early July when the tips started wilting and turning brown, a great indicator that your bulbs have finished growing. After pulling the bulbs out in the morning mist we left them out in the afternoon sunshine to dry out the clinging dirt and begin the curing process. 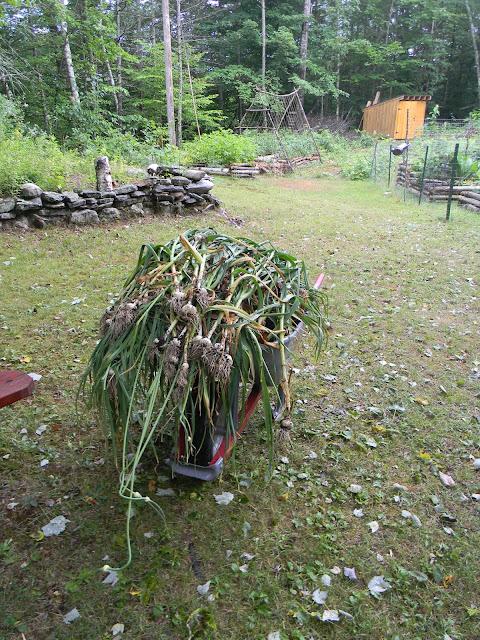 After about 36 hours of open air curing I hauled the harvest over to the picnic table to trim the tops and make the sizeable harvest a little more manageable. 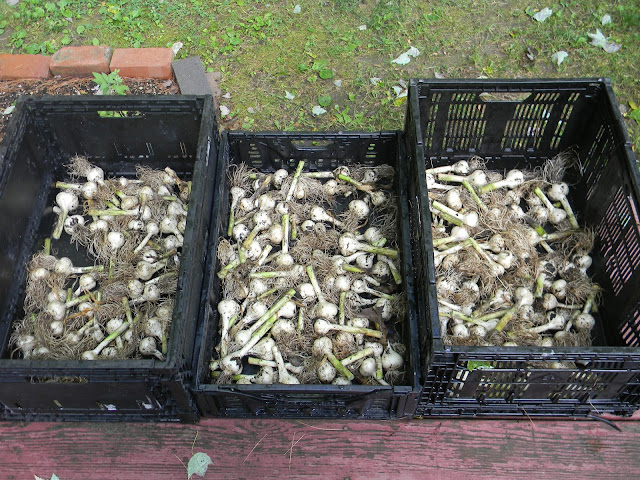 After trimming close to 200 bulbs I spread them evenly across 3 crates and stacked them in the shed. The aroma of garlic was in the air for a couple weeks as the layers of outer skin cured into a papery envelope for the pungent cloves of garlic to last us through the winter/spring seasons. 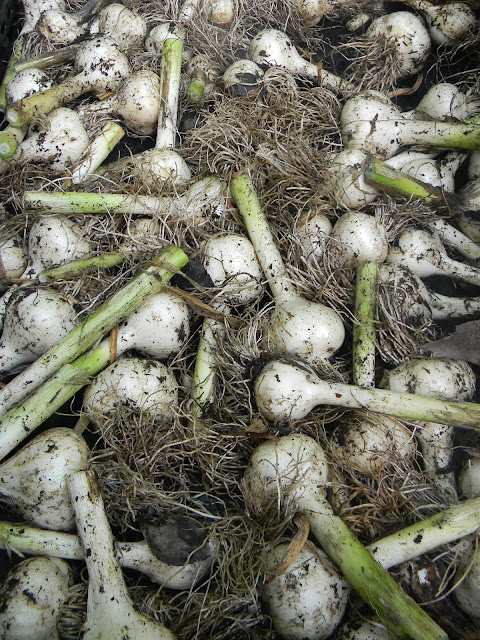 After they finished curing we trimmed the stem closer, shaved the stringy roots and filled a netted bags with close to 20lbs of garlic to hang in our cellar ! 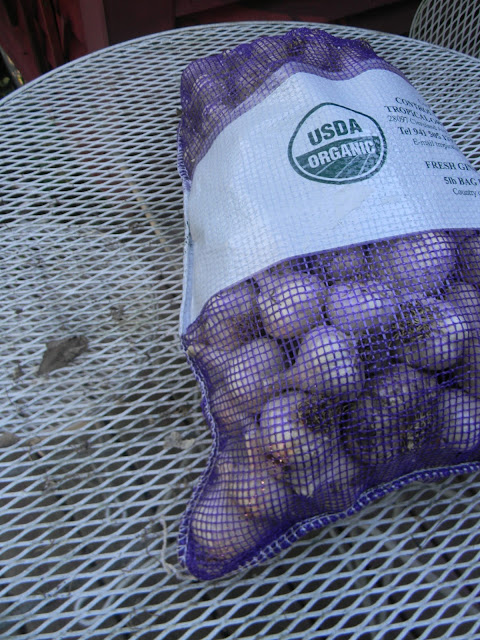 A portion of the garlic will be used to plant next years crop as well, although I may source another variety to add to the mix when we hit up the Commonground Fair at the end of the month. I recall a farm that sells 10-15 different varieties of garlic every year and Im hoping this wasn't just a dream ! 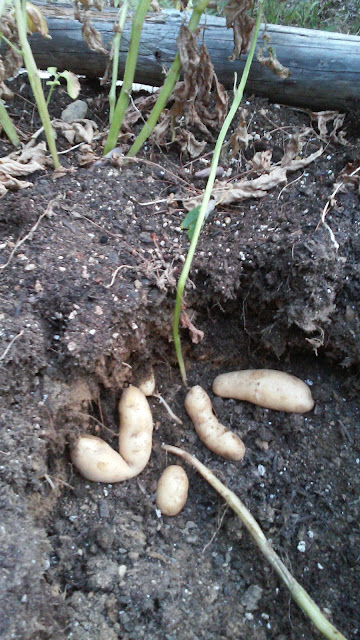 Another successful harvest was our fingerling potatoes. As the leaves yellowed I knew our day of digging had arrived. Its a nice, "get your hands in there and make it happen" kind of job ! I used a hand cultivator to pull up the little golden gems and the flipped a good heap of soil in the raised bed resulting in a 15lb box of delicious Russian Banana Fingerlings. 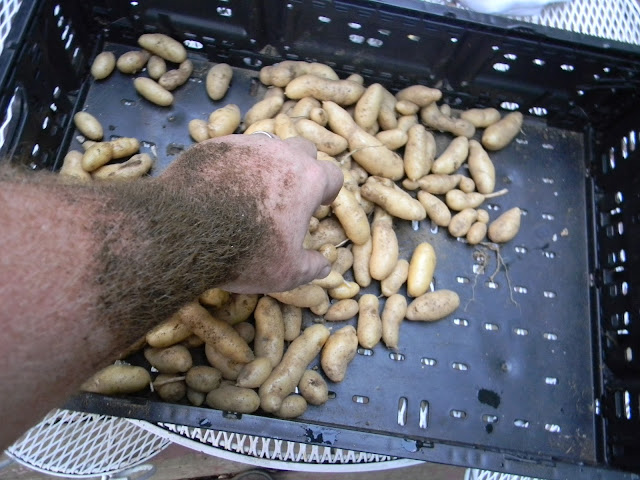 These are such a delight to eat... so fresh and nutty I never realized how good a fresh picked potato could be. I put some leftover pieces from that nights dinner into the fridge and found them to be just as good straight munched cold the next morning. 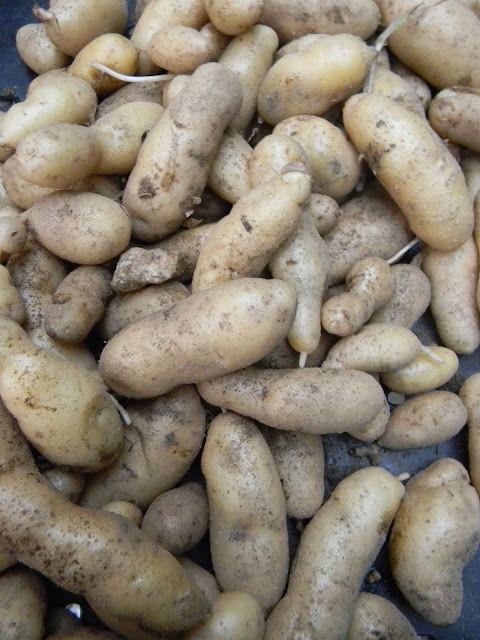 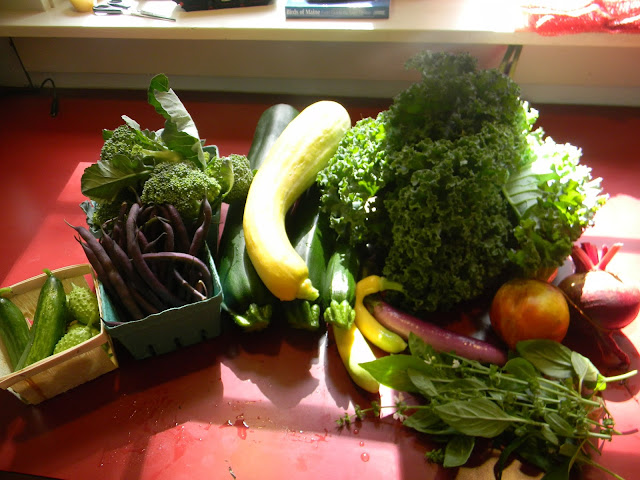 Our planting schedule seemed well timed this year as things ripened together and as one thing went by another seemed to ripen and mature. Plentiful Burgundy Beans, Beets, Summer Squash, Zuchinni and a colorful array of heirloom cukes were also a highlight this season ! 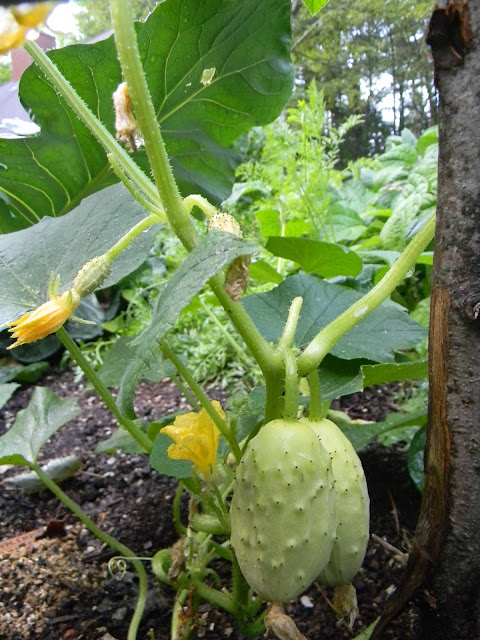 We had four types that were noteworthy this season !
Jamaican Sour Gherkins, Old Time Whites,  Lemon and Diva 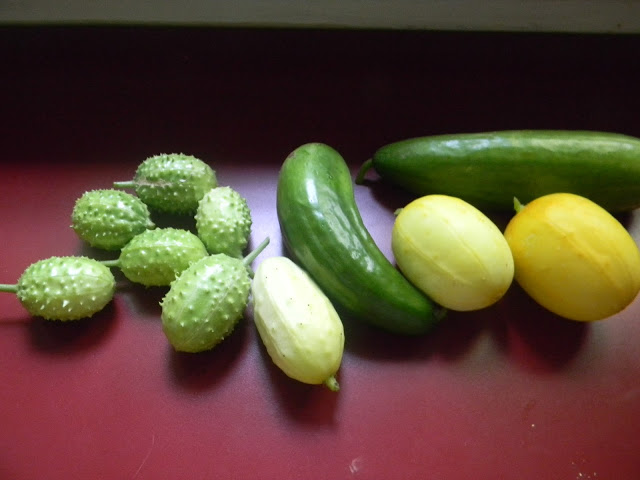 The combination of heirloom cuke varieties paired with the perfect lettuce mix from Frith Farm and fresh picked cherry tomatoes made a salad part of just about every meal. 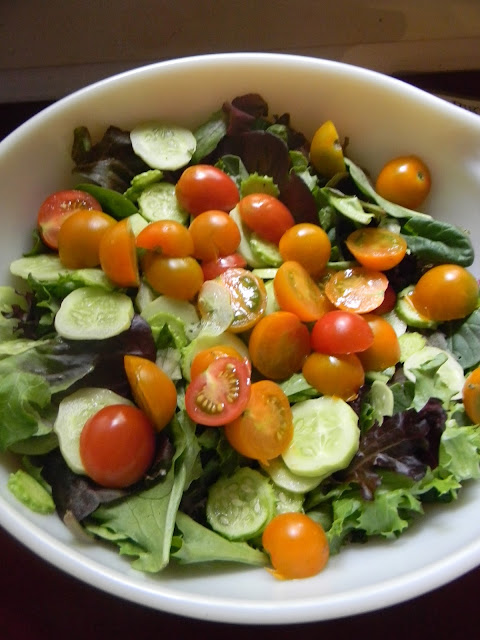 A not so successful story this season has been our tomatoes. Don't get me wrong we have had a decent supply of tomatoes for ourselves, but last year we produced over 20 jars of sauce and a good batch of salsa with only a dozen plants. This year I spent the time and energy making a new raised bed and planted close to 30 plants... I figured Id be giving out bushels full by this time of the year but alas my design has shown some flaws under the stress of a severe drought and an abundance of a tomato growers worst nightmare... 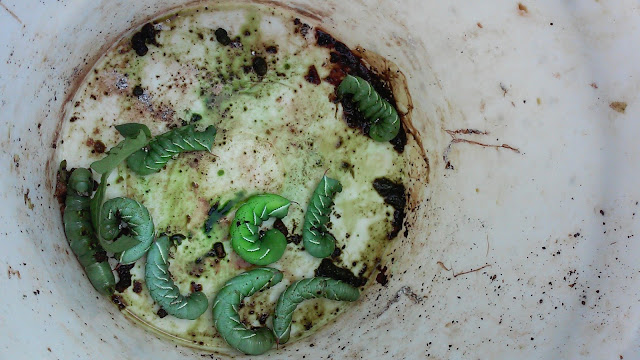 It was funny, one night after dinner I went out to relax in the garden during the waining hours of evening light when I noticed some bare leaves. I was a bit baffled thinking of what could have eaten leaves off our plants? Some of which were chomped 4-5 feet from the ground... after a little confusion as to where to lay the blame I quickly figured it out the next morning as the sun remerged and the abundance of hornworms and the devastation they can leave in their wake became quite apparent ! 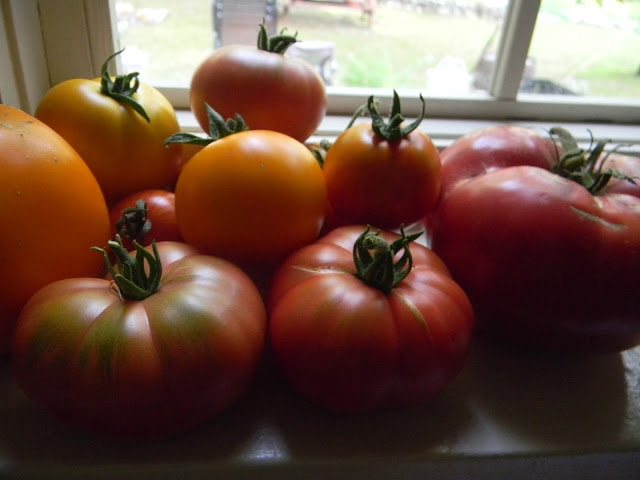 Eventually the majority of our tomatoes bounced back from the gorging party of the hornworms and the tomatoes started flushing out. We have however lost lots of ripe fruits due to lack of water which caused a healthy dose of blossom rot on approximately 50% of the fruit that appeared.                   Blossom Rot is something that is closely linked to drought conditions and a lack of calcium in the soil. Sometimes the soil contains enough calcium but the lack of water creates a wall that doesn't allow the correct nutrients to reach the fruit in turn creating a deficiency. Lesson learned... water more heavily in times of drought. Although being on a private well during such a dry summer has made me hesitant to water too heavily. 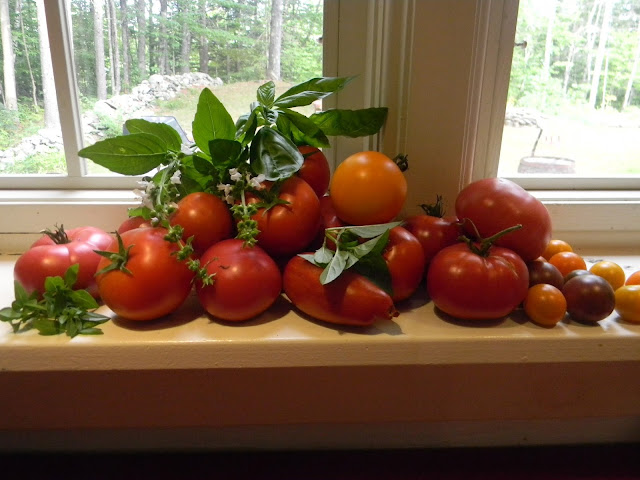 I will say the fruit that has ripened without blemishes has been delicious, Id say the positive aspects of the lack of water is that is also seems to concentrates the flavors and makes for luxurious eating ! 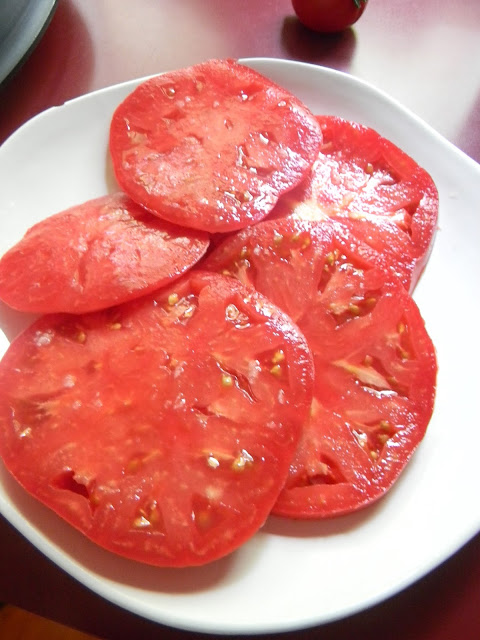 As the Burgundy beans finished up the Dragon Tongues just started. This classic Dutch heirloom variety was one of our favorite additions to this years garden ! 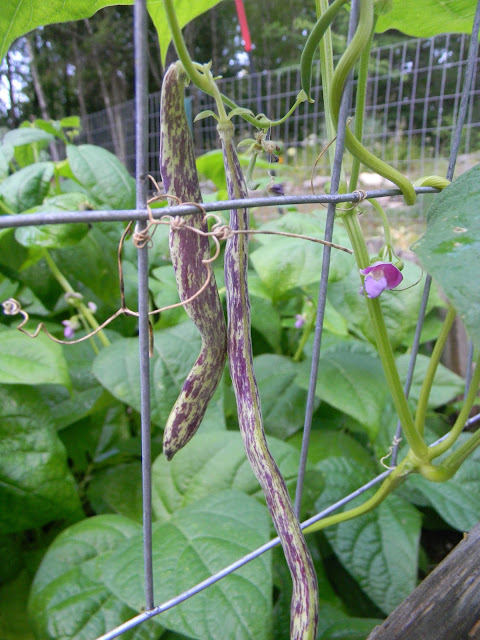 I think part of the successful pollination we saw this year in our vegetable garden has to be contributed to our wonderful bees ! The hive is doing well, the lack of rain also put some stress on the colony as without rain we have less flowers resulting in less nectar and pollen which are the lifeline of a successful hive. Ive been spending lots of time observing their habits and making small adjustments to help them where needed. In the coming days I have plans to winterize the hive as autumn slowly drags away the warm humid days and lays its frosty grasp on the homestead. 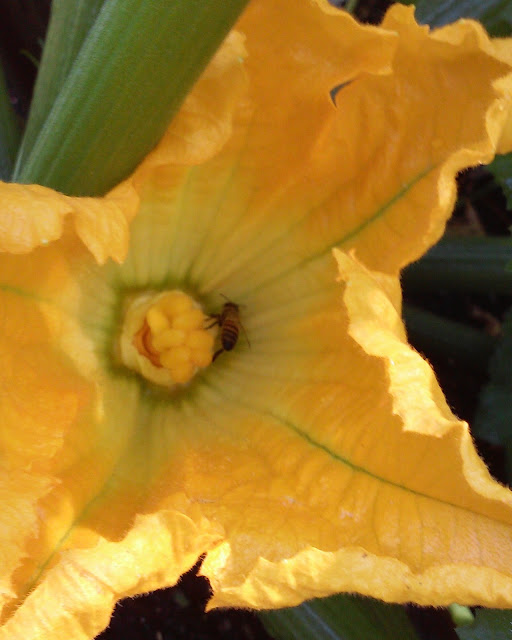 A happy bee in the zucchini blossoms. 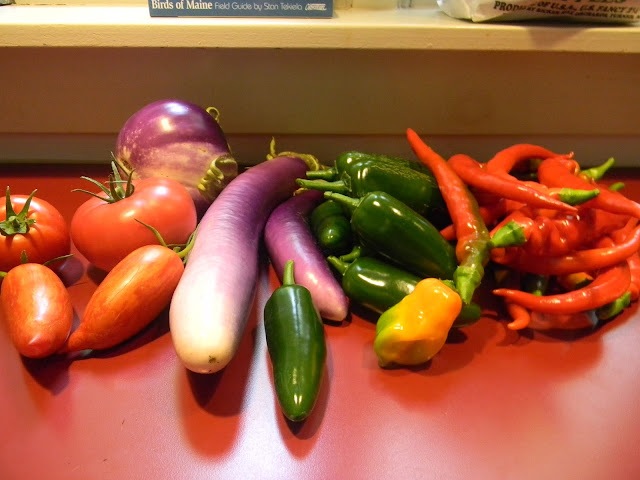 This evenings harvest... this year has been a bumper crop of hot peppers, lots of red flame, jalapenos ripening as we speak and even our scotch bonnets and a few ghost peppers are sizing up. Stay tuned for a fierce batch of Localrootz hot sauce !

Till next time... thanks for stopping by !
Posted by Lukaduke at 8:34 PM