So Montreal was a blast... but it was time to head back to Portland, ME.  However I told my wife, Cassi, that we needed to make a quick stop in Vermont.  Why?  To get my hands on some of this Hill Farmstead Beer that I had heard so many good things about and hopefully get a tour of the facilities. Unfortunately after a quick email explaining our blog and a upcoming painting series Im working on based on beer and brewing,  I was informed that they do not yet give tours but would be open for a tasting and to purchase beer from 12-5. They also told us that we could take as many pictures as we wanted. OK, Greensboro, VT... here we come.  The brewery is located about  20 minutes off rt 91 and it wasn't too hard to find with a little help from my parents GPS that we borrowed for the road trip, just in case.  However, I will say the first turn off route 16 that the GPS told me to take was an old logging road... I slowed down looked at it briefly and after all this rain decided to keep going and see where the GPS recalculated us.... luckily it took us up a couple miles farther to a much better graded dirt road which I gingerly proceeded onto... Im not a city boy, I know better than to drive carelessly through the backwoods of New England without using my head !  Anyhow more on that in a minute.... after a few miles up the dirt hill we came to this quaint little sign and I let out a nice sigh of relief. We were on the right track.... 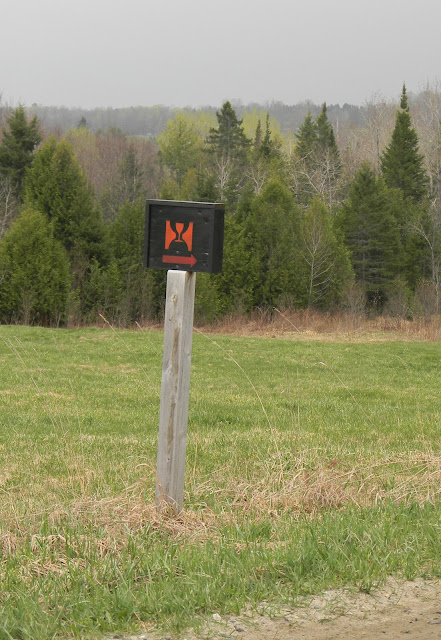 and a few moments later the relief turned into excitement as we rolled into the gravel driveway of
Hill Farmstead Brewery ! 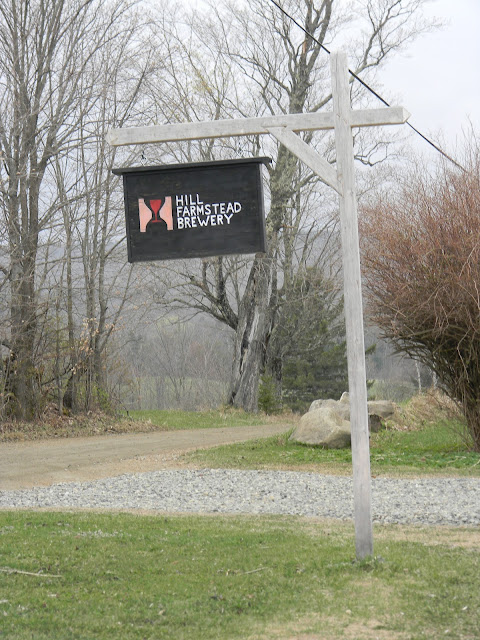 We were not alone... probably had about 10 cars in the lot, a couple of other Mainers, some locals and a muddy car from NH.... apparently we learned later that the car from NH had taken that first turn onto the sketchy logging route and he had to get towed out from Shaun the owner of the brewery and his dad... there is a lot lot more to that story... turns out this same guy was selling some of the Hill Farmstead Bottle releases on ebay for a HUGE profit...

These are from Hill Farmstead's Twitter
@thecarstuckinthemudguy "Please don't sell our beer on EBAY ever again. My dad and I pulled you out of the mud and then you sold Damon for 145$? Nice."

then jokingly the next day
@anotherbrewer "An all ebay beer release... I told my dad that he should start selling our beers on ebay to pay for his retirement..."

(Names have been changed... this guy got enough flack on all the beer rating sites and his own blog in the following days) 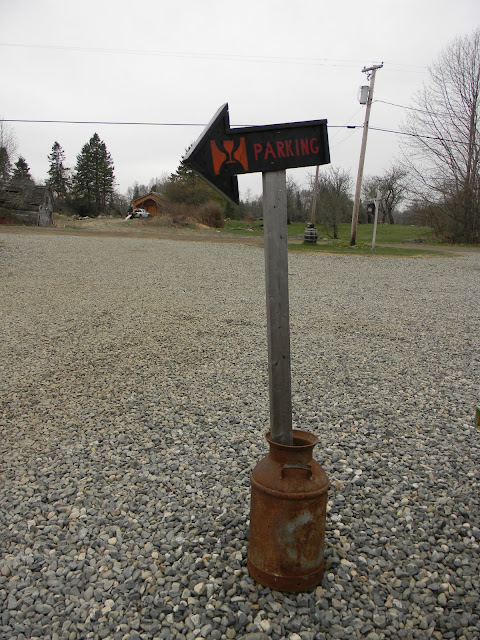 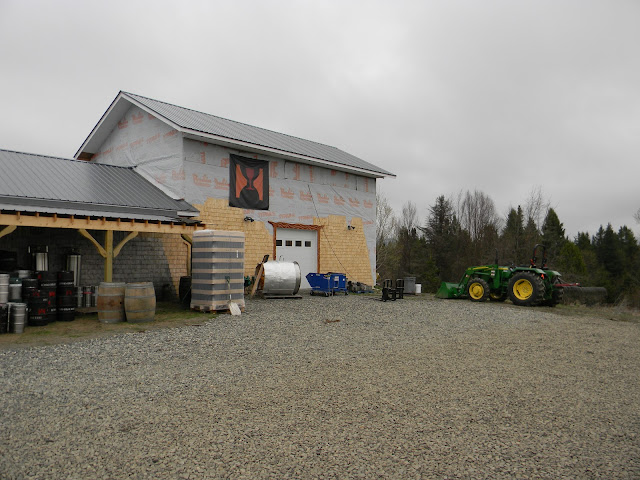 Hill Farmstead has only been up and running for a little under two years and in that small amount of time they have acquired an almost legendary status on sites like ratebeer, beeradvocate and in conversations among local beer geeks!  The farm on which the brewery sits has been in the Hill family for over 220 years and the scenic green hills of Vermont are the perfect backdrop for this rustic Belgian style brewery.  The owner and head brewmaster Shaun Hill has past experience brewing at Trout River and the Shed before embarking on a journey to Denmark.  While there, he honed his brewing skills while pitching in at Nørrebro Bryghus and eventually starting his own label called Grassroots.... the first Shaun Hill beer I ever tried.  Anyhow after returning to his ancestral homeland of Vermont, he went to work creating the brewery that now exists today !  The Hill Farmstead logo, I learned from their website, is based off of an old sign that once hung in Aaron Hill's (Shaun's great x3 grandfather) tavern just up the hill from the current brewery in the early 1800's !  I can really appreciate the fact that this brewery respects the history of its surroundings as well as the surrounding farms and other artisanal producers in the area.  It is not uncommon for the brewery to use many local ingredients in their recipes... in fact one of the beers we got a chance to try as well as purchase was called Anna. Named after Shaun's grandfathers sister.  Its a Honey Saison crafted with American malts, European & American Hops, lots of Vermont Wildflower Honey and the most important ingredient... Hill Farmstead Well Water !  It is amazing how important of a role water plays in making good beer and I have seen Shaun quoted that the water is what makes these amazing well crafted beers so damn GOOD ! 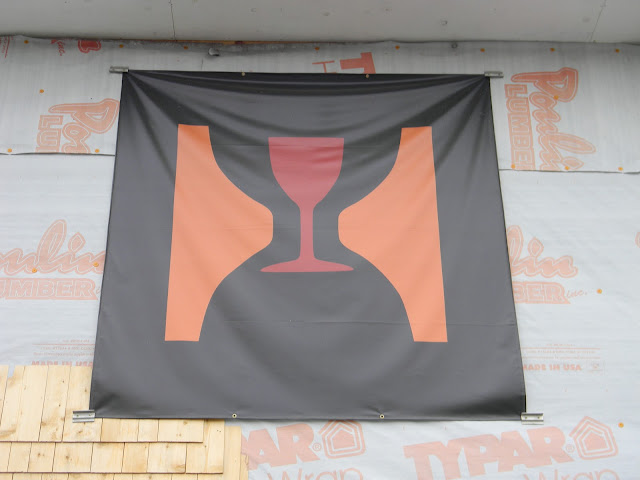 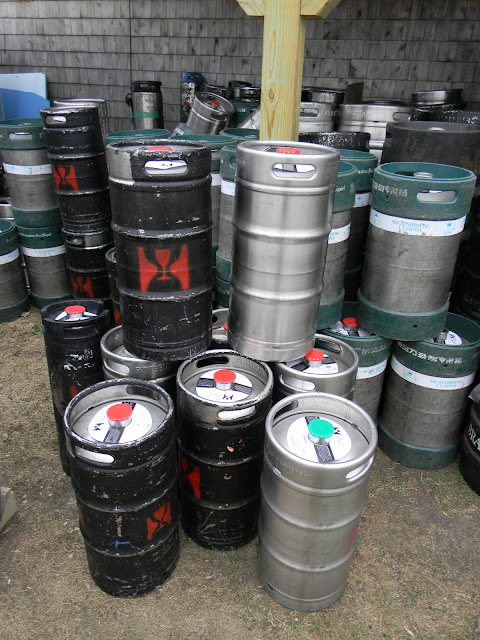 Anyhow, the brewery was rustic... Typar isn't the best look, and the grounds were littered with kegs just waiting to be washed rinsed and refilled.... and then we stepped through the door. 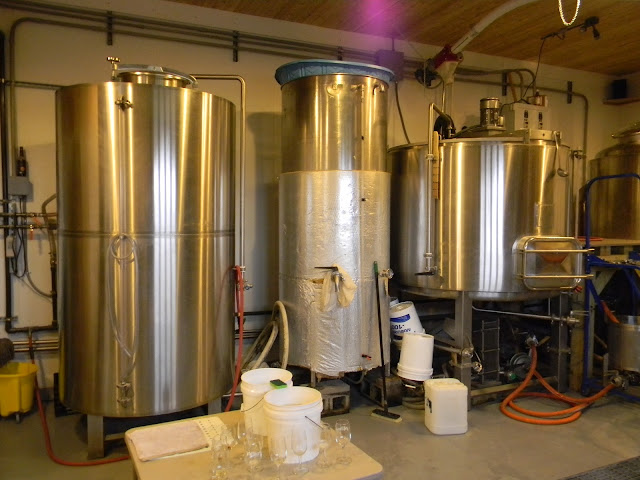 There are no bells and whistles at this brewery... just straight forward good beer.  If I remember correctly a tasting was $5 for 4 small beer pours (I believe the 4 tasting limit is a VT state law).  They currently had 6 beers on tap... do the math !  Luckily I was there with my wonderful wife so we were able to both partake in the tasting and share a few sips resulting in us being able to sample all the beers they had on tap.  Unfortunately they were currently out of any of their bottle releases so the only option for us to purchase beer was straight off the tap... into either a 750ml swingtop or a 2 Liter growler.  Not that I was complaining... the one problem with draft fills is they need to be consumed fairly quickly.  Ive learned the trick is to keep them very cold, which is why I had a cooler full of ice ready to go.... and then you should consume the hoppier beers first and leave the darker less hoppy beers for later because they will sit a little longer... however that being said, I try to only grab as much as I can consume in a couple days to a week at the absolute MAX... anymore than that and the beers flavors will be somewhat compromised... that being said, I just happen to know a few other people that enjoy drinking beer as much as me so I knew whatever I fit in the car would not last very long at all ! 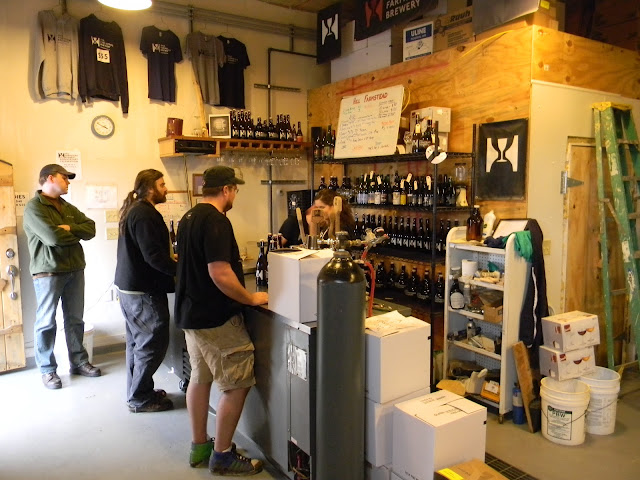 Along with the 6 taps they had running, they also had a license to sell other beer selections out of the brewery so there was a handful of craft beers also available to purchase from brewers such as Fantom, Mikkeller, Haandbryggeriet among others.  The staff was very friendly and they were very busy filling orders that ranged from the guy down the street passing through for a growler fill to people like me who needed to write our large orders down on a piece of paper in order to keep it straight.  Everybody was happy to be standing around drinking great beer and waxing poetics about beer and brewing processes.  Im kinda a wall flower in situations like those but I overheard the guy pouring growlers talking about how Shaun said he thought the Oude Gueuze Tilquin was the beer of the year for 2011 and I must say I completely agree.  Anyhow, I did have to hop into the conversation when I heard that and then proceeded to inquire if anyone in the place knew of a nearby place to find the somewhat elusive and highly sought after Alchemist Heady Topper.  I was in luck... the man pictured above who will remain nameless on this blogosphere  (so funny because he ended up being the guy from NH who was stuck in the mud and was selling the bottle releases on Ebay)* said he happened to have a couple of cases in his trunk and offered me a fourpack at retail.  SCORE !  I was also informed that the closet shop to purchase some more would be the Buffalo Mountain Food Co-Op just down the road in Hardwick!  Perfect... being a manager at a small natural food store here in southern Maine, I was excited to stop in a local VT food co-op and check out the local food selections as well as pick up some VT cheeses and a snack for the 3 hour roadtrip we had left!   So we finished up our purchase, tossed in a Hill Farmstead glass, passed by Shaun Hill walking through the yard... Thanked him for making some great beer and went bouncing down the dirt road with a full cooler headed toward downtown Hardwick... the town known to us because of the book The Town that Food Saved ! I reminded Cassi on the way that we saw the author of that book speak at a slow food writers night we went to @ Space Gallery a few years prior... It is a small world after all.  Speaking of small worlds... they had a great selection of local foods, some of which we carry at Lois' Natural, the store I work at.  The Co-Op and a nice little cafe up stairs... and a great selection of Cabot and Jasper Hill Cheeses.  We stocked up and grabbed the last four pack of Heady Toppers they had on their shelf.  The cashier was so sweet... she said that someone told her this beer taste like pineapples!  I told her how sought after this beer was becoming around New England and the US and she didn't seem to believe me... turns out she has know Shaun Hill since he was a little boy as well !  What a finish to an amazing day in Vermont... off we went over the rolling hills anxious to get back to our little apartment in the west end of Portland and snuggle with our beer and lonely kitties !

* As a side note, I had no idea who this now infamous fella was when he went out of his way to sell me some Heady Toppers... I happened to slip him my business card and told him to give me a shout if he ever came to Portland... that invitation stands! Why because I judge people based on how they treat me and not on what other people think of them.  Do I agree with him making money off of limited edition beers inevitably pushing their prices up and out of the reach of working stiffs like me... of course not but I blame the people who are willing to purchase these beers at such inflated prices just as much as I do the people selling them.

Stay tuned for a rundown and description of the beers I grabbed in Vermont and exactly what I thought of them !