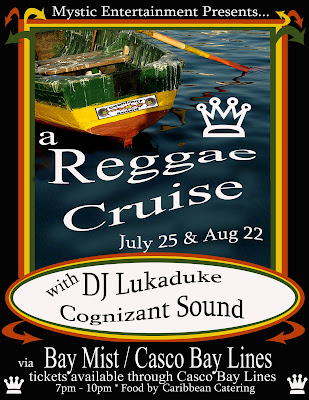 First up...Come enjoy a sunset over the Casco Bay as you float along to the infectious grooves of Maine's premier soundsystem, Cognizant Sound. DJ Lukaduke will be spinning a well selected blend of classic roots and conscious current dancehall. Add to the mix a heavy dose of Caribbean food provided by Caribbean Catering included in the mix and you have a night to remember courtesy of Mystic Entertainment. Tickets are $18/20 and available @ the Casco Bay Lines. 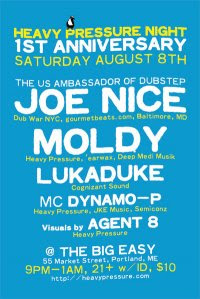 Next up...We are proud to present the US Ambassador of Dubstep
JOE NICE (Dub War NYC, gourmetbeats.com, Baltimore, MD)

Representing Baltimore, JoeNice is universally recognized as the ambassador of the dubstep sound in North America and one of the purveyors of the sound worldwide with his upfront selection and skillful mixing. Joe's show on GourmetBeats.com was the first to feature dubstep in the states and this platform has spread the dubstep sound on the airwaves, across America and around the world. JoeNice is the first American-based DJ to play on London pirate radio, RinseFM. A member of GourmetBeats, resident at a monthly party in New York City called DubWar, recognized as one of URB's NEXT 100 for 2007, JoeNice is looking to make a difference. Be ready. 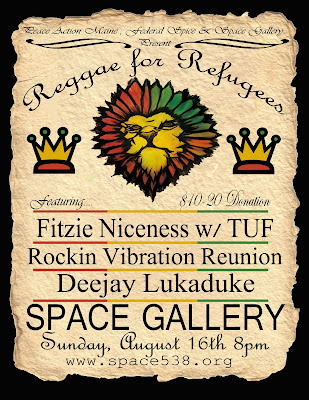 Finally for now...Peace Action Maine, Federal Spice, and SPACE present a benefit for local refugee families featuring Fitzie Niceness with Tuf, a Rockin' Vibration reunion, and DJ Lukaduke from Cognizant Sound. Jamaican-born Fitzie Niceness has established himself in Maine and throughout New England with CD releases and live appearances featuring his soulful R & B inspired vocals and conscious lovers lyrics. He will be backed by Tuf, Portland's rootsiest reggae band. Rockin' Vibration is a legend in Maine's reggae history. From the early 80s to the late 90s, Rockin Vibration ruled the local scene. They originated the Peaks Island Sunday reggae series, and opened for nearly every major reggae talent passing through Portland. DJ Lukaduke will be bringing an extensive selection of roots reggae and Studio One classics to spin between sets.